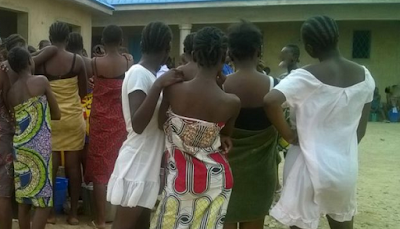 This investigation is exclusive to TheCable and if this is true, there's nothing more heartbreaking!

With N5,000, or even less, one of the security guards employed to protect students at the Federal Government Girls College (FGGC), Langtang, Plateau state, would gladly pimp the girls to strangers.

Speaking to TheCable’s undercover reporter, the guard gave an insight into how he organises “runs” for the teenagers for a fee, and how this is a common practice. This investigation by Femi Owolabi and Seyi Awojulugbe also exposes the rot in the once-prestigious Unity School, where students use water from an untreated well, sleep on broken beds, study in hostile classrooms — and live practically unprotected from predators.

You are in Langtang, Plateau state, for the weekend and need a schoolgirl for the evening? Someone is ready to help you make the arrangement for a fee. You can even have more than one girl if you choose. There are plenty of them at the nearby Federal Government Girls College (FGGC). The pimp is actually paid to protect the girls, but that is by the way.

Before TheCable set out for Langtang, the guard — whose phone number the reporter had collected from an acquaintance — consistently beat his chest and gave assurances that getting girls out of the hostel “is no big deal”, and it was soon obvious that the pimp had been in the business for a long time.

Bani Guest House, a popular lodge along the Langtang highway, is well known to the girls, the guard said. He explained that most of them do attend Sunday evening parties at Bani, where their boyfriends come to wait for them.

The reporter had disguised as a visiting businessman in need of girls to spend “a nice time” with. He promised to pay the guard more than what he would ask for. All the “big man” needed was a guarantee of a swell time. The excited guard called endlessly, excessively delighted with the business at hand.

TheCable ran into a little bad luck along the way — the timing of the visit coincided with when the SS3 girls were writing their exams in July 2017, and other classes were on vacation. But, not to worry, the guard was ready to pull the strings all the same.

Settling over a plate of rice ordered for him at the guest house, the guard told his would-be customer that girls in SS3 who were rounding off their final exams would make the perfect picks.

“I am giving you outgoing students,” he said, his face loosening into a smile. “There are some writing exams, it’s just to get a clue to know them and ask if they can do this for me. There are girls who do ‘runs’ but the issue is money.”

The guard, who was quick to request for money so he could move round and also “sort out” the girls’ transportation, revealed that there are a couple of schoolgirls who are into the act of sneaking out of the school premises.

“You’ll discuss how much you’ll give them,” he said, pocketing the N5,000 the reporter had given him as upfront for the task. “All those girls are small girls and they don’t know money much. If you treat them well, they will look for you if you’re still around.”

The guard had left his duty post. For hours, he was moving round the school, searching for girls who could be available under the tight deadline.

“I have arranged two girls now, and they will come to meet you when they are done with their exams today,” he would later say on phone.

The girls eventually did not turn up as planned — they wrote their papers late and feared coming out of the school could jeopardise the other papers the following morning, the guard explained. They would turn up after writing the day’s papers, he said with an air of certainty. At this point, TheCable editors decided to abort the mission for professional reasons.

One of the newly graduated girls, who later spoke with TheCable, said this particular guard is the go-to man pimping girls to strangers.

“He used to be a kitchen staff,” the girl said. “He impregnated one of the girls in the hostel, you know the hostel is close to the kitchen, and I think as a punishment, he was moved from the kitchen to the gate.”

One of the graduating girls who spoke with TheCable is not sure if girls are being pimped to strangers, but she knows at least three members of staff whom she claimed made sexual advances to the girls.

“One teacher used to call girls to his office in the night,” she said. “But, I don’t know what he used to do with them. One of the girls told us that when she went to his office, he only asked her out, and that when it’s weekend she would follow him to his house.”

Another teacher, it was alleged, would call girls to his office in the night, and it is not clear what he did with them. “It is during prep time, 7-9pm, that we see girls going to the teacher’s office,” she said. She named all the teachers involved but TheCable, for legal reasons, chose to withhold their identities.

At the ICT department, where girls go for biometrics for examination purposes, the man in charge — under the pretense of guiding them — would touch them sexually. “That one will be touching girls’ breasts and buttocks,” the graduating girl told TheCable.

The ministry of education, which directly supervises federal government colleges, says it is not aware of the allegations of pimping at Langtang.

Chineye Ihuoma, director of press at the federal ministry of education, told TheCable: “If you have any proof, the best way is for you to write us formally and we will conduct proper investigations. But, how can a security man in the school be pimping girls to a stranger? How can?”

One of the students told TheCable that some adventurous girls do sneak out through the unfenced area to attend parties and meet with boyfriends in town. It makes things easier for the security guard who seems to be in the business of pimping them to strangers.

“Students are not allowed to go out of the school when in session, but the stubborn ones do sneak out to attend parties.  They go through the back-of-school because there is no fence, but some go through the gate because the security is not so tight,” another student told TheCable.