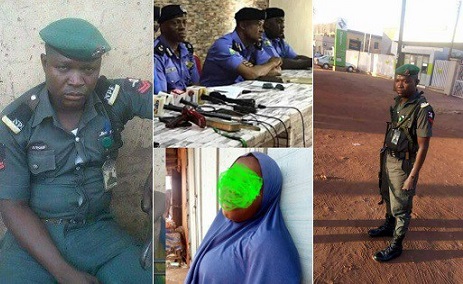 Umar said the command moved in on hearing of the disturbing news and arrested the culprit, who he said is currently facing police internal disciplinary procedure.

Umar described the action of the police officer as a very sad one for the command and police in general, which does not reflect the core values of the Nigeria Police force, while vowing to ensure that justice is done.

He said, “The command wishes to confirm the arrest of force number 275601, Corporal Barau Garba attached to 7PMF Sokoto but deployed to Anambra State on special duty for the alleged abduction and defilement of a 14-year-old girl of Hausa quarters in Asaba, Delta State.

“The erring policeman was arrested, defaulted and detained accordingly; and he is facing police internal disciplinary procedures. He will be arraigned before the appropriate court of the land as soon as the criminal investigation against him is concluded,” Umar said.

Though the errant police officer was not paraded before journalists, the commissioner said that confession from the culprit was that he picked up the wandering minor in Asaba and took her to his house but never had sex with her.

But Umar insisted that even if he did not have sex with her, he is still culpable for taking her home instead of the usual procedure of reporting lost persons.