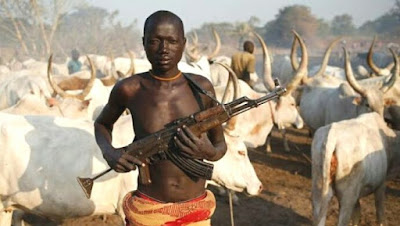 The organisation, which is an umbrella body for ethnic nationalities in Adamawa State, made the call while reacting to the recent killings of innocent people by suspected Fulani herdsmen in some communities in the state.

Chairman of the group, Musa Jekeko, while addressing journalists on Friday in Yola, the capital, urged Buhari to quickly intervene and stop the killings.

They demanded the removal of the Minister of Interior, Lt. -Gen. Abdulrahman Danbazzau, for his failure to arrest the situation.

The group said, “The Nigerian Government, under the leadership of President Muhammadu Buhari, ought to have removed Dambazzau and replaced him with someone else, who will properly coordinate internal security in the country.

“We find it increasingly difficult to comprehend the position of the government on the Fulani militancy. Why would Danbazzau, who had implied that Fulani aggression on our people was civil, turn round to allow military air strikes on our people?

“The increased Fulani militia operations, under the guise of being herdsmen, especially under the leadership of this administration, raise some fundamental questions on the sincerity of its preparedness to stamp out terrorism.”

Meanwhile, the youth wing of the Christian Association of Nigeria in Plateau State has called on the governor, Simon Lalong, to immediately sign the Anti-Open Grazing Bill into law or forget about receiving any votes from them in the 2019 election.

President of the body known as YOWICAN, Daniel Kadzai, in a statement said they would continue to resist all groups opposed to the implementation of the bill in the state.

While reacting to unsavoury comments allegedly credited to the Chairman of Miyetti Allah Cattle Breeders Association of Nigeria, Plateau State chapter, Nura Abdullah, to resist the passage of the bill, Kadzai said they would do their best to ensure the implementation of the law.

He said, “If Governor Simon Lalong fails to sign the Anti-Open Grazing Bill into law, he should forget about second term in 2019; that will be the end of his political career in Plateau State as we will mobilise the youth against him.

“His duty as governor is to protect his people against intimidation, harassment and killings by any group or individuals.

“Fulani people cannot claim to be indigenes of a state as a group of people without one constituency or ward. You can be an indigene as an individual or family but not what MACBAN is claiming to be.

“You cannot come to my house and dictate to me how I should carry out activities in my domain. If Fulani are members of the Plateau State House of Assembly, they should vote against the bill. At the end of the day, the majority will decide with their votes because this is democracy.”