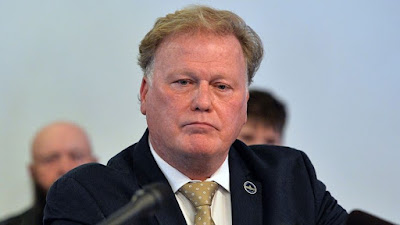 A Republican lawmaker, nicknamed 'The Pope,' who was facing allegations that he sexually assaulted his daughter's friend at a New Year's Eve party shot himself dead on a Kentucky bridge.

Father-of-five and pastor Dan Johnson, 57, who made headlines for posting racist pictures likening the Obamas to monkeys and once claimed he had run a morgue at Ground Zero, wrote an emotional, Facebook post just hours before killing himself.

Billings said Johnson stopped his car at the end of a bridge in a secluded area, then got out and walked to the front of the car. He said an autopsy is scheduled for Thursday morning.

'I would say it is probably suicide,' he said.

On Monday, the Kentucky Center for Investigative Reporting published an account from Maranda Richmond, who was 17 at the time, saying Johnson sexually assaulted her in the basement of his home on New Year's Eve 2012.

According to court documents, Richmond was living at Heart of Fire City Church accommodations.

She alleged that Johnson had kissed her and fondled her underneath her clothes while he was a pastor.

Louisville police investigated the matter but closed the case and did not file charges.

On Wednesday, at about 5pm, Johnson posted a Facebook message in which he again denied the allegations levied against him and noted that PTSD 'is a sickness that will take my life, I cannot handle it any longer.'

'The accusations from NPR are false GOD and only GOD knows the truth, nothing is the way they make it out to be. AMERICA will not survive this type of judge and jury fake news,' Johnson wrote in the Facebook message, which has since been removed.