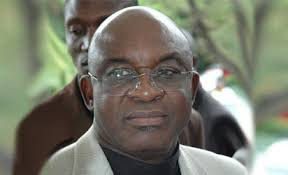 A former Senate President, David Mark, has stated how he took possession of a public property in 2011.

Mr. Mark, still a senator from Benue State, was quizzed last week by anti-graft detectives at the EFCC.

In a statement Sunday, he said the grilling was over the campaign finance that went to the Peoples Democratic Party Benue during the 2015 election.

Mr. Mark was the Senate President from 2007 to 2015. He said he was asked about a N2 billion which the PDP allegedly transferred into a bank account run by the National Assembly in 2010.

The money was then allegedly used to bribe lawmakers of all parties, Mr. Mark said, adding that the claim was absurd.

The lawmaker followed up with another statement signed by his spokesperson, Paul Mumeh, on Tuesday, alleging that the EFCC was after him over a property he purchased from government in 2011.

“The EFCC or any other agent of Government are (sic) chasing shadows because the property was dully offered for sale, bided for, and he purchased like any other person would in line with Federal Government’s Monetisation Policy that was started during the time of President Olusegun Obasanjo,” Mr. Mark said.

“I had the right of first refusal. Even if I did not purchase it, someone else would have.

“I am a law-abiding citizen. I did not flout any law,” the senator added.

Premium Times has not independently verified Mr. Mark’s statement that he’s being probed by the EFCC over the controversial purchase.

Wilson Uwujaren, a spokesperson for the anti-graft office, did not immediately return requests for comments.

Mr. Mark also alleged political persecution on the part of the Buhari administration, saying he wasn’t the only one who bought official quarters meant for principal officers of the parliament.

“I am at a loss as to why it is now a subject of contention.

“If this persecution is about politics, my political party and the 2019 elections, I dare say that only God and Nigerians would decide. No amount of persecution would alter the will of God.

“I had refrained from commenting on this because it is already in the law Court. But they have taken the matter to the Court of public opinion,” he said.

The presidential Task Force on Recovery of Government Properties has been making moves to evict Mr. Mark from the property, but the senator said he had dragged the government to court.

He said his lawyer, Ken Ikonne, has been litigating the matter in suit number FHC/ABJ/1037/2017 at the Abuja Division of the Federal High Court, saying he followed due process and legally acquired the property from the Federal Capital Development Administration, FCDA, on April 27, 2011.

He recalled that the Federal Executive Council decided to authorise the sale of the properties housing the principal officers of the National Assembly because the general security of the area had been altered/compromised due to the sale of the other houses in the Legislative Quarters to the public.

Consequent upon which the houses were offered for sale and dully purchased.

Mr. Mark said he was given the first option of refusal upon which he dully accepted on April 21, 2011 and he paid the agreed purchase price to the adhoc committee on sale of Federal Government houses on April 27, 2011.

Okoi Obono-Obla, chairman of the properties recovery panel, said the property was “grossly undervalued” when It was sold to Mr. Mark.

“They sold it to him for about N500 million or so,” Mr. Obono-Obla told Premium Times by telephone Wednesday morning. “This is a big property that is sitting on a large land in a choice part of Abuja.”

Besides, the official said, the property should not have been sold because it was allegedly amongst a few government properties that were reserved for top public officials under the monetisation policy.