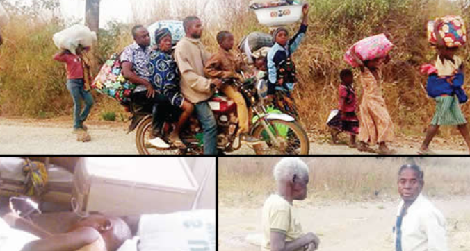 Herdsmen have killed two of the policemen drafted to keep surveillance on the troubled Logo Local Government Area of Benue State.

The incident occurred on Monday when the herders attacked the camp of Mobile policemen, Mopol 13, stationed at Awashuwa village and injured another.

One of the policemen who survived the attack, told newsmen that the herdsmen invaded the camp in a guerilla manner and overpowered them.

They injured one inspector and a sergeant before they slit their throats in a nearby bush in the area while they also burnt some houses within the area after the attack.

One other policeman  who was injured is recuperating in the Benue State University Teaching Hospital, while the remains of the deceased policemen have been taken  to the mortuary in Makurdi.

The Police Public Relations Officer who confirmed the report said that a reinforcement had been sent to the area from 13 PMF led by the Commander, CSP Abubakar Garba.

“Our men came under attack at Awashuwa in Logo Local Government area of the state. They were ambushed by the herdsmen who had tried to attack them earlier in the day but they were repelled. Two of our men were killed and their riffles taken away.”