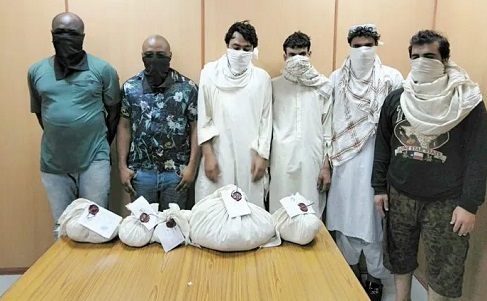 They were arrested after an Afghan who was expecting heroin cargo in Delhi was arrested. He sang and led the NCB to the Nigerians.

The first Nigerian arrested was arrested in Vasant Kunj area and a search of his house led to the recovery of 6.02 kilograms of heroin.

The second Nigerian was arrested with 488 grams of heroin in the Uttam Nagar area.

“The street value in the International drug market of the total seized contraband is more than Rs 30 crores,” the release read.

“Sustained operation by Narcotics Control Bureau against drug menace with special emphasis on international drug syndicates has further achieved breakthrough resulting in busting an Afghan-Nigerian Heroin cartel which was being operated in New Delhi area,” the release read.

The NCB acted on a tip-off from a reliable source, that one Afghan national was coming to New Delhi from Kandahar, following which security was beefed up at the international airport.

“The alert NCB team also marked two more Afghan nationals whose movements were found suspicious. Though a search of their belongings yielded no contraband, but when they were subjected to medical examination, presence of foreign substance was revealed in their stomach. The three suspects were admitted to hospital and under medical supervision, a total of 253 pellets containing Afghan Heroin were recovered. The total weight of Heroin was found to be 1.8 kgs,” according to the release.

“This successful operation is a result of increased focus of NCB on international drug networks, especially Afghan heroin supply network, who are working in collaboration with Nigerian drug traffickers,” the release added.

The release added that India is a “transit country” for passing the drugs to other countries apart from being a market and therefore the syndicates are ceaselessly trying to smuggle heroin to India.

“Further investigation in coordination with foreign authorities is being conducted to identify other persons involved in the illicit drug syndicate,” the release added.