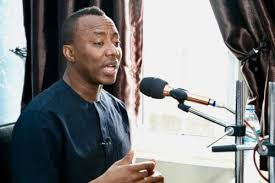 In a fresh application filed before the Federal High Court in Abuja, Mr Omoyele Sowore, Convener of #RevolutionNow protest, who is being held by the Department of State Services, has asked for bail in liberal terms.

Sowore filed the fresh application on Friday after his failed bid to have the court hear his earlier one challenging the detention order issued against him by Justice Taiwo Taiwo on July 8, 2019.

The affidavit he filed in support of the application stated in part, “That the applicant (Sowore) herein has never been charged with any criminal offence whatsoever.

“That the Nigeria police also conducted investigation on the matter and made its findings public.

“That the persons who participated in the protests of August 5, 2019, were charged with the offence of unlawful assembly at the Magistrates’ Court in Ebute Meta, Lagos State, Osogbo in Osun State and Calabar(Cross River).

“That on August 9, 2019, the applicant filed an application to set aside, discharge and/or vacate the said ex parte order permitting his detention for 45 days.”

The security agency had accused Sowore, the SaharaReporters publisher and presidential candidate of the African Action Congress in the last February 2019 poll, of planning to topple the President Muhammadu Buhari government, through the protest.

Sowore denied the coup allegations insisting that he only mobilised Nigerians to protest against bad governance and other vices.