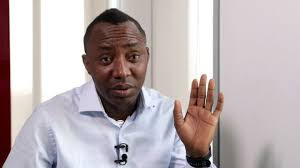 The Justice Taiwo Taiwo-led court said there was no longer a subsisting order holding Sowore in detention, hence the need to grant him bail.

Justice Taiwo, however, ordered Sowore to deposit his international passport to the court while releasing him to his lawyer, Femi Falana.

The judge held that Falana should be responsible for producing him in court once he has been notified of the charge against him.

He said the law provides for the freedom of all Nigerians regardless of economic or political status.

In a short ruling, Justice Taiwo said: “The order of court has expired. It has not been renewed and cannot be renewed in view of the motion ex-parte earlier withdrawn.

“The liberty of all Nigerians high or low, poor or rich is guaranteed by the constitution. It’s for this end that I’m of the view that the defendant ought to be released forthwith.”