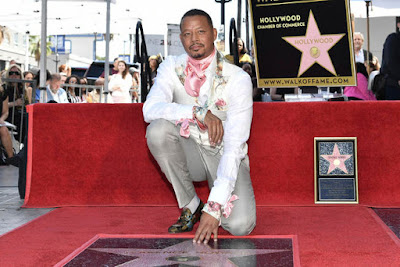 A star on the Hollywood Walk of Fame was unveiled Tuesday honoring Oscar-nominated actor Terrence Howard, coinciding with the season premiere of his Fox hip-hop drama "Empire."

Former Fox Television Group Chairman and CEO Dana Walden was among those Howard thanked in his nearly three-minute acceptance speech.

"A few years ago I was taken down by Hollywood and was told I would never work again," Howard said. "But then, a young woman named Dana Walden had faith in me and allowed me to head her show."

Directors Malcolm D. Lee and Dito Montiel preceded Howard in speaking at the 11:30 a.m. ceremony in front of the El Centro Complex on Hollywood Boulevard, near the corner of Hollywood and Vine.

"Because my name is written in stone in Hollywood, as long as there's a Hollywood Boulevard, Terrence Howard will still stand," he said.