N90bn Allegation: We Will Fight For Osibanjo, CAN Vows 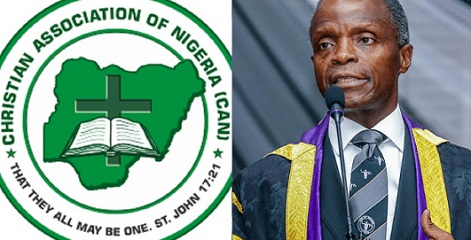 The Christian Association of Nigeria (CAN) has thrown its weight behind Vice President Yemi Osinbajo following the N90 billion allegation levelled against him.

Timi Frank, former deputy spokesperson of the All Progressives Congress (APC), had alleged that Osinbajo mismanaged N90 billion made available by the FIRS for 2019 election campaign purposes.

Frank claimed to have information to defend his allegations and dared the vice president to challenge him in court.

The FIRS had denied the claim and demanded an apology.

While speaking at the Christian Ecumenical Centre in Abuja, on Friday, Supo Ayokunle, CAN national president said the allegations are baseless and are far from the truth, adding that the church will defend the vice president.

Ayokunle called out Timi Frank to tender evidence or desist from tarnishing the image of the vice president.

“He has cleared the air that the allegation is baseless and there is no truth in it and that some people are plotting against him and he was ready to provide himself to be cleared,” Ayokunle told journalists.

“If there is an allegation there must be evidence and that it can never happen and will never happen. The church and the entire country will fight for him.”