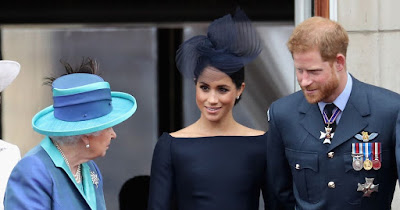 The Queen sees her grandson Prince Harry like a "prodigal son" who will return to her in the future, a royal expert has claimed.

Harry and his wife Meghan Markle have quit the Royal Family in favour of a life away from the spotlight, moving to LA with son Archie.

But Ingrid Seward, editor-in-chief of Majesty magazine, says the Queen will "welcome him back with open arms".

The Monarch expressed her sadness at the decision in a statement when the couple first announced their intentions, but said she understood.

Speaking to Sky News, Ingrid said: "The one thing that has really carried the Queen through her long life is her Christianity and her deep religious beliefs, and one of the Christian teaching is forgiveness.

"I think she's looking at Harry like the prodigal son, that he will come home and she will welcome him home with open arms."

But Ingird believes the Queen will be keeping her true feelings close to her chest, not even sharing them with those closest to her.

She said: "I think she's very loathed to criticise anything he's doing.

"Privately, she might feel very sad about it but she will never ever comment on it, even probably to her family. She would keep her feelings very much to herself.

During the interview, Ingrid also shared on her thoughts on how the Queen may be spending the lockdown.

She's staying at Windsor Castle with her husband Prince Philip, and they're both self-isolating in line with government guidelines.

Despite being 94, the Monarch normally has a very busy day-to-day life normally, packed full of meetings and paperwork.

And Ingrid believes there is no chance of the Queen slowing down at this time, and she's sure she will be keeping busy.