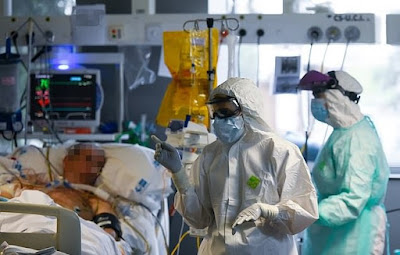 Spain has recorded its biggest daily leap in coronavirus cases for nearly three weeks as another 6,740 people were added to the tally today.

The jump is partly explained by the growing use of antibody tests, which have added nearly 17,000 people to the total since they were introduced.

Spain said today that 16,774 people had tested positive via the antibody test method, an increase of 3,944 from yesterday's total of 12,830.

Only 2,976 of the 6,740 new cases were confirmed using a traditional PCR test, official figures showed.

The Madrid region accounted for 1,097 of those while the second worst-hit region of Catalonia was responsible for another 652.

Antibody tests show whether a patient's immune system has developed defences against coronavirus, meaning they have been infected in the past.

However, governments in several countries have warned that antibody tests are not yet reliable enough to roll out on a large scale.