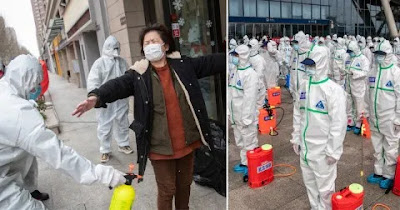 The last patient to be treated for coronavirus in the Chinese city of Wuhan has been discharged from hospital, a health official has said.

The news, released on Chinese state-run media, means the orignal epicentre of the deadly virus has no remaining hospital patients.

National Health Commission spokesman Mi Feng told reporters on Sunday: ‘The latest news is that by April 26, the number of new coronavirus patients in Wuhan was at zero, thanks to the joint efforts of Wuhan and medical staff from around the country.’

Covid-19 is believed to have originated in a wet market in Wuhan and first emerged in December before spreading quickly worldwide.

Wuhan and the province of Hubei were put in lockdown near the end of January, with roads sealed, trains and planes cancelled and residents unable to move freely for more than two months.

The city is still testing residents regularly despite relaxing the restrictions. The city had reported 46,452 cases, 56% of the national total. It saw 3,869 fatalities, or 84% of China’s reported, yet disputed, total.

China remains on alert for a second possible wave of the virus, with Beijing reimposing some of its lockdown measures and other cities seeing new quarantines introduced.

The country reported just three new coronavirus cases on Monday and no new deaths for the 12th day in a row.

A total of 723 people remain in hospital across the country and just under 1,000 are in isolation and under monitoring for being suspected cases or for having tested positive without showing symptoms.

China’s overall death toll currently sits at 4,633 among 82,830 cases. Worldwide, the death toll stands at 205,000 with nearly three million confirmed infections, according to a tally by Johns Hopkins University.