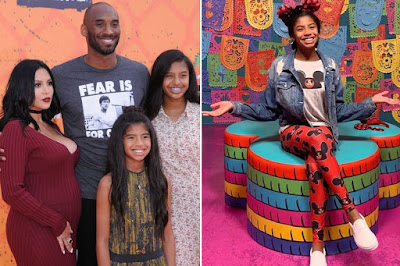 Vanessa Bryant has wished her late daughter Gianna a happy birthday on the day the teenager would have turned 14.

Mum Vanessa suffered unimaginable heartbreak earlier this year when her daughter Gianna and her husband Kobe Bryant were killed in a tragic helicopter accident along with nine other people.

The group were travelling near Calabasas, Los Angeles when the chopper crashed into a hillside during heavy fog.

Widow Vanessa, who is also mum to Natalia, Capri and Bianka, took to Instagram to pay tribute to Gianna on her first birthday since January's crash.

In the heartbreaking message, Vanessa said she missed everything about her girl, known affectionately as Gigi, and that she wished she could wake up and have her there with her on her special day.

Alongside a smiling photo of the teenager at Disneyland, Vanessa wrote: "Happy 14th Birthday to my sweet baby girl, Gianna. Mommy loves you more than I can ever show you. You are part of MY SOUL forever. I miss you so much everyday.

"I wish I could wake up and have you here with me. I miss your smile, your hugs and your giggles. I miss EVERYTHING about YOU, Gigi. I LOVE YOU so much!!!!!!!"

Vanessa has won huge respect from fans for the incredible strength she's shown in the months since the crash and for keeping the memories of her husband and daughter alive.

She even bravely spoke out at the Kobe and Gigi memorial service in February.

Vanessa stepped up at the podium to deliver an emotional speech honouring her family.

"The outpouring of love and support that my family has felt from around the world has been so uplifting. Thank you so much for all your prayers," she said.

She went on to praise Gianna's 'amazingly sweet and gentle soul' and said Kobe had been her 'everything.'

The husband and wife had been together since Vanessa was 17.

"I was his first girlfriend, his first love, his wife, his best friend, his confidante and his protector. He was the most amazing husband. Kobe loved me more than I could ever express or put into words," she said.

The deaths of Gianni and Bryant, one of the world's most admired sports figures, prompted an outpouring of shock and grief from fans and fellow athletes around the globe when the news broke in January.

The retired Los Angeles Lakers forward had been on his way to a youth basketball tournament in which he was coaching Gianni and two other girls aboard the luxury chopper were due to compete.