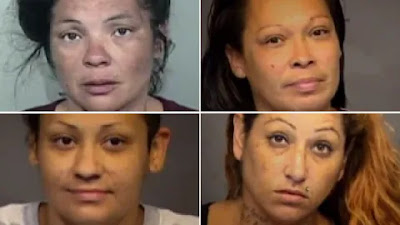 Four women have been charged in connection with the disappearance and death of a mother whose body was found days after she vanished.

Nadine Chaves, Mercedes Gomez, Christina Gomez and Melissa Servin were all arrested in Mesa, Arizona on Friday. They are each facing federal kidnapping charges related to the murder of 34-year-old Melissa Valenzuela, a mother-of-three found dead on March 23.

Valenzuela was last seen with Mercedes and Christina Gomez on March 17, according to court documents. Investigators said Servin and Chavez were also seen arguing with a woman matching Valenzuela’s description on the night she was last seen.

One witness told police that they saw the four women dragging the woman believed to be Valenzuela into Chavez’s home as she screamed in terror and begged for someone to call 911, according to 12 News.

The witness told authorities that she never saw the screaming woman again, but they said they saw Chavez, Mercedes Gomez and Christina Gomez cleaning up the front of the home the next morning.

Chavez’s brother was later interviewed by police and he said he went to her home on the night of March 17 and saw blood in the bathroom and missing floor tiles.

According to court documents, investigators believe Mercedes and Christina Gomez left with the body while the other two women cleaned up the alleged murder scene.

Chavez’s brother said his sister showed him a picture of Valenzuela from a news article and inferred she was the woman killed in her house.

Authorities conducted a search of Chavez’s home on March 24 and found blood in the bathroom, although they are still awaiting forensic results.

All four women have been charged with federal kidnapping, although investigators are still trying to determine their individual roles in the alleged killing.