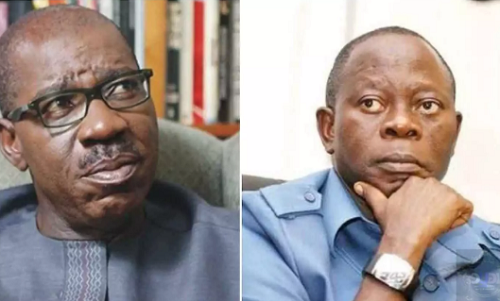 Oshiomhole and Governor Godwin Obaseki have been locked in a bitter power struggle, with efforts to reconcile the two APC factions, each loyal to the other, unsuccessful.

While Obaseki is seeking re-election on the APC platform, Oshiomhole’s allies intend to present a consensus candidate to challenge the governor.

They said in a statement: “It is not surprising that Comrade Adams Oshiomhole has continued his doom-fated attempt to destabilise the Edo State chapter of the APC.

“But what is most unconscionable is that he is propagating this move at the expense of the safety and wellbeing of Edo people.

“By organising the supposed mock primary on April 30, 2020, with more than 50 persons in attendance, he is undermining efforts of different stakeholders at containing the spread of the virus and also dishonouring all those who have died from it.

“Those who organised the political gathering initially held at Lucky Imasuen’s residence in Benin City later moved to different locations to continue their inglorious show of shame, in the perpetuation of the wishes of their puppet master.

“The antics of Comrade Oshiomhole are well-known, but it bears repeating that he is on a mission to re-enact what happened in Rivers, Zamfara and Bayelsa in Edo State.

“He has continued to perpetuate the ‘factionalising’ of the party in the state, with intent to cause the party to lose its opportunity to participate in the forthcoming gubernatorial election.”

The state government urged the Presidency and the APC leadership to call the former Nigeria Labour Congress (NLC) president and former Edo governor to order.

“It must be said that Comrade Adams Oshiomhole has in the face of the COVID-19 pandemic not shown remorse for the persons lost to this invisible enemy.

“While Nigeria was losing eminent sons and daughters to the pandemic, for instance, he released videos of himself in a gym house, performing aerobics, as if mocking the dead.

“This was at a time the entire country was mourning the death of the Chief of Staff to the President, Mallam Abba Kyari.

“This, among other indiscretions, has painted Comrade Oshiomhole in the most despicable light and leaves much to be desired of his humanity,” they added.

But, the APC faction loyal to Oshiomhole denied the allegations.

The Publicity Secretary, Chris Azebamwan, said the allegations were part of the state government’s “desperation to smear the name and image of Comrade Oshiomhole”.

He said in a statement: “As part of our corporate social responsibility, the APC in Edo State organised a forum for well-meaning individuals within our fold to put resources together to assist our government and the vulnerable in our society to cope with the challenges of partial lockdown.

“In doing so, we were mindful of the relevant guidelines by the World Health Organisation, the National Taskforce on Covid-19, and Edo State government.

“The latest in their litany of wailings is that Comrade Oshiomole caused a mock primary to be conducted in Edo State. Nothing could be farther from the truth.

“The National Working Committee of the APC, which Comrade Oshiomole heads, has not released guidelines for the conduct of primaries in Edo State. One would ask, therefore: on what basis would the Edo APC undertake such an exercise?

“To further accuse Comrade Oshiomole of deploying soldiers and policemen to the venue of the imaginary primaries is to ascribe to him, powers that he does not possess.

“We are not aware that as National Chairman of the APC, he has command authority over the police and military personnel.”

The party accused Obaseki of plotting to oust Oshiomhole as APC National Chairman, but with “with dismal results”.

It asked the state government to desist from “an infantile and self-serving attempt to drag the high office and pristine image of President Muhammadu Buhari into this reprehensible undertaking”.

The party urged Oshiomhole to focus on governance, including increasing COVID-19 testing capacity.

“This is not the time to score cheap political points, and certainly not the time to pass the buck and ascribe the failings and ineptitude of the current government in Edo State to a phantom godfather that only exists in the warped imagination of Godwin Obaseki and his co-travellers,” Azebamwan said.