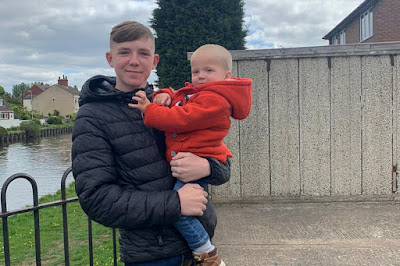 A teenage boy has been hailed a hero after jumping into a canal to save a toddler from drowning.

Ryley Ferguson, 15, was on his daily walk with his two dogs when he spotted the 15-month-old in the water near his home in Knottingley, W Yorks.

The quick-thinking teenager threw his shoes and coat off to grab the toddler as he sank to the bottom of the canal.

Now Rebecca Hampton, 33, the relieved mum of rescued boy Reggie Johnson, has hailed Ryley as her ‘Guardian Angel’....and is backing calls by locals to give him a Mirror Pride of Britain award.

Ryley did not hesitate when he knew Reggie’s life was on the line. 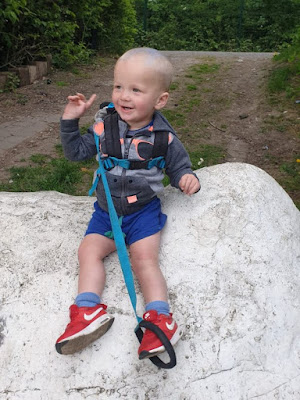 “I’m just so happy I was there and managed to dive in, in time to save him,” he said.

“I didn’t have time to think, I was just on my walk with my dogs when I saw him fall in. I took my shoes and coat off - it was pure instinct at that point.

"It all happened in a split second. Suddenly I was at the bottom of the canal and managed to grab him.

"I was pretty calm but the water was so cold, my heart was racing.

“In the end all that mattered was that he was okay. If I walked by just thirty seconds later, he could have died. I had to save him.”

Ryley struggled to get out of the canal as he was holding the toddler, but two men raced to pull him clear as he shouted for help.

Once they got out, little Reggie began to cry but Ryley says the tot calmed down after he reassured him, saying, ‘don’t worry, I got you’.

Rebecca was reunited with her son just moments later. She had been working in the garden, and her adventurous little boy had wandered into the canal which runs behind their home.

The single mum-of-two, who also has daughter Petal, four, says the families now share a “bond for life” and Reggie will grow up knowing what Ryley did.