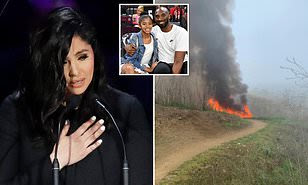 Vanessa Bryant is suing the Los Angeles County Sheriff's Department after eight deputies took and shared graphic pictures of the deadly helicopter crash that killed her husband Kobe and 13-year-old daughter Gianna - including one cop who showed them off to a woman at a bar.

The bereaved wife of the NBA star filed the claim Friday, seeking damages for emotional distress, mental anguish and invasion of privacy after the deputies took photos of the aftermath of the January 26 crash in Calabasas, California.

The claim states the deputies took photos of the 'dead children, parents, and coaches' for their 'own personal purposes' - despite Bryant personally requesting Sheriff Alex Villanueva ensure the site be secured for privacy the morning the tragedy occurred.

Sheriff Villanueva has previously said only the county coroner's office and National Transportation Safety Board investigators were permitted to photograph the crash site.

'Anybody outside of that would be unauthorized. They'd be illicit photos,' he said back in March.

'In reality, however, no fewer than eight sheriff's deputies were at the scene snapping cell-phone photos of the dead children, parents, and coaches,' the claim states, according to People magazine.

'As the Department would later admit, there was no investigative purpose for deputies to take pictures at the crash site. Rather, the deputies took photos for their own personal purposes.' 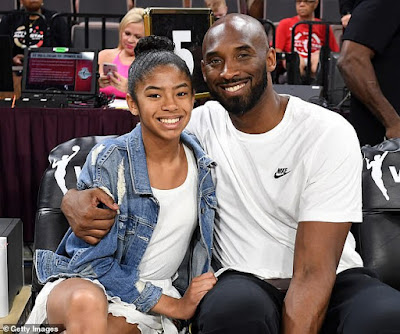 Such personal uses include one instance where one deputy was allegedly caught sharing the photos with a woman at a bar.

'Upon information or belief, sheriff's deputies shared photos of victims' remains with individuals unaffiliated with the investigation for their own excitement and sense of self- importance, including one instance where a deputy shared photos to impress a woman at a bar,' the filing says.

The claim says the actions of the deputies have 'compounded' Bryant's 'grief' during what is already an 'immense tragedy' for the family.

'Mrs. Bryant has suffered an immense tragedy by losing her husband and daughter; her grief has been compounded by the severe emotional distress caused by the sheriff's deputies' misconduct and the Sheriff's Department's mishandling of that misconduct,' it says.

As well as citing the action of the deputies, the claim also blasts the 'department's mishandling of this egregious misconduct' when the photos surfaced.

It states the offending deputies were simply told to delete the images and faced no discipline for their actions.

It also states the department knew about the illicit photos for almost a month and did not notify Bryant, who only learnt of their existence after February 28 when news outlets reported on the scandal.

'Mrs. Bryant was distressed to learn that the Department did not initiate a formal investigation until after the L.A. Times broke the story on or about February 28, and that the Department had taken few if any steps to contain the spread of the photos,' the filing continues.

When Bryant's attorneys contacted the department asking about the steps being taken to investigate the photos and reprimand the perpetrators, they were told the department was 'unable to assist' with the request, the claim says.

'Rather than formally investigate the allegations to identify the extent of dissemination and contain the spread of the photos, Department leadership reportedly told deputies that they would face no discipline if they just deleted the photos,' it reads.

The claim also states Bryant is 'deeply worried' that the images have not been disposed of and will resurface.

'Mrs. Bryant is deeply worried that all copies of the sheriff's deputies' photos have not been accounted for, and that it is only a matter of time before she or her daughters encounter them on the Internet,' it says.

A spokesperson for the Bryant family said they wish to hold the Sheriff's Department to account and ensure other families of victims do not have to go through the same 'emotional distress' they have faced. 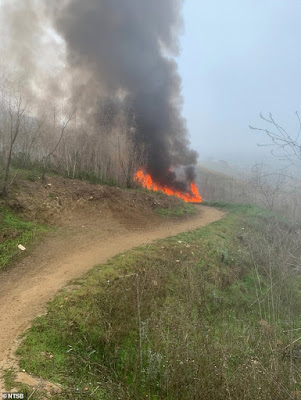