gathered that at least 10 top European 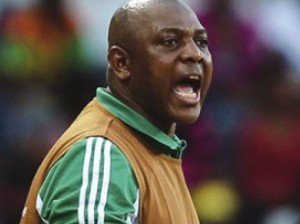 has landed a mouthwatering two-year deal

with the South African Soccer Federation to

take over the coaching job of the countryâ€™s

immediately after the ongoing Brazil 2014

The Eagle Online gathered that Keshi would

cease to be the Super Eagles manager after

the Mundial, since he has accepted to take

the offer from South Africa.

According to our source, the Big Boss

would head to Johannesburg straight from

unveiled by the South Africans once he is

through with the World Cup assignment.

It would be noted had South Africa had last

Gordon Igesund, after their friendly against

A source said: â€œI can confirm to you that

the deal between Keshi and SAFA has been

after the World Cup.

â€œThe South Africans are impressed with

what he has done with the Eagles and want

him to turn around the fortunes of Bafana

gathered that at least 10 top European

Agents of the coaches have submitted their

CVs to the Nigeria Football Federation

It is not yet clear if the NFF would settle for

a foreign manager to take over from Keshi

or appoint another indigenous coach.

With the qualifiers for the 2015 Nations Cup

in Morocco set to begin in September, the

NFF does not have the luxury of time.

Our source stated that the NFF will take a

decision on who takes over from Keshi

immediately after the World Cup.

would be against the Super Eagles as South

Africa and Nigeria have been drawn into the