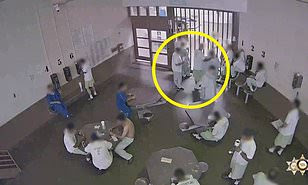 A group of California prison inmates deliberately infected each other with coronavirus in a failed bid to get out of jail early.

A sudden spike Covid-19 cases was reported at the Pitchess Detention Center in Castaic back in mid-April seemingly without explanation.

LA County Sheriff Alex Villanueva announced Monday that 21 inmates at the jail successfully infected each other with the virus by passing around a hot water bottle and by breathing into the same face mask.

Shocking surveillance footage shot on April 26 inside the day room of the jail shows the men passing around a hot water bottle and taking sips before passing it along to the next inmate.

'With the hot water, they were trying to falsely elevate their temperature readings to generate a symptom for Covid-19,' Villanueva said.

They were also seen sharing the cup of water and were seen crowding around in the same area of the day room instead of practicing social distancing.

The men, Villanueva says, hoped they’d receive sympathy from a judge to allow them to get released early from the facility and placed on house arrest once they tested positive for coronavirus.

'There was some mistaken belief among the inmate population that if they tested positive, there was a way to force our hand and somehow release more inmates out of our jail environment, and that’s not gonna happen,' Villanueva said at a Monday press conference.

Villanueva says that 21 of the men in the 50-person block contracted the infection, but will not be given the chance to ride out the virus at their homes as they hoped.

'Then all of a sudden we saw a spike, a few weeks, ago, a very noticeable jump, and we couldn’t really understand why, when everything seemed to be going the way we wanted to,' Villanueva said.

Since February LA County's inmate population has reduced from the largest in the nation with 17,000 prisoners behind bars to a little over 11,700 over the past few months.

'Had this pandemic swept through while we were sitting on 17,000 inmates, the results would have been catastrophic,' Villanueva said.

So far 357 inmates have tested positive for Covid-19, a 60 percent jump from May 4 when there were just 123 cases among inmates. 117 of inmates who positive have recovered.

There are currently 4,590 in quarantine - about 40 percent of the jail system's total population. Now now new inmates are being tested upon entering the jail system.

'There’s a reason why these people are behind bars to begin with, because they violated the norms of society,' Villanueva said.

'But to then imperil not only their only safety, but the safety of their fellow inmates who did not want to participate in this behavior. It also endangers all the personnel, both the professional staff and the sworn staff,' he added.