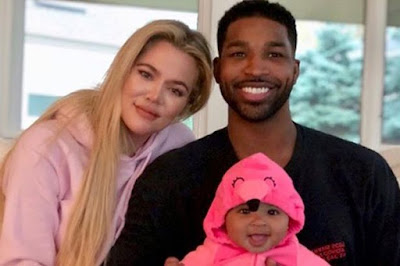 Tristan Thomspon has taken a paternity test after claims he's fathered a third child, according to reports.

The basketball player and ex of Khloe Kardashian has found himself at the centre of yet another scandal.

It's said that a woman is claiming she fell pregnant with his third child after they slept together. And it's reported he quietly took a DNA test in order to determine whether or not he is the father.

Now Khloe has addressed the claims in a Twitter outburst on Wednesday evening.

Tristan is already dad to Khloe's daughter True, two, and son Prince, three, who he shares with ex Jordan Craig.

Khloe and Tristan started dating before Prince was born, and at the time, Khloe faced accusations she had "stolen" Tristan away from his ex.

She denied it, saying they were fully broken up before she got involved with him.

Khloe famously went into labour and gave birth to True after finding out that Tristan had cheated on her.

Videos and pictures of him kissing another woman had emerged online.

Despite everything, Khloe gave him another chance, only for him to cheat on her again, this time with her sister Kylie Jenner's then-BFF Jordyn Woods.

The scandal was the final straw for Khloe, who dumped him despite his desperate attempts to win her back.

In episodes of Keeping Up With The Kardashians, he's been seen showering her with gifts to try and win her over, but she made it clear they were only going to be co-parents.

It's said he used a relationship testing specialist, who is highly trusted by the Kardashians, to carry out the test.

But because of the association, it was alleged that he had tampered with the results, and he's been ordered to take another test, which it's said he's agreed to do.