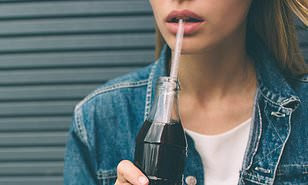 Oh dear, we don't even know what to believe again o. Stiop dring coke, drink fruit juice and now this? .

Women who have at least one fruit drink a day are more likely to suffer heart disease than those who drink a fizzy soda like Coca-Cola once a day, a study warns.

A study of more than 100,00 women found one or more sugar-added fruit drinks a day increased the risk of cardiovascular disease by 42 per cent.

In contrast, a fizzy drink a day was associated with only a 23 per cent higher risk of cardiovascular disease.

The research was based on more than 100,000 women who participated in the California Teachers Study. No men were involved in the study.

The large-scale project began in 1995 with the aim of assessing the long-term impact of different drinks.

In the study cohort, drinking one or more of any type of sugary beverage daily was associated with a 26 per cent higher likelihood of needing a revascularisation procedure, such as angioplasty to open clogged arteries.

When compared to people who never or rarely drink sugar-added drinks, people having one a day were found to have a 21 per cent increased chance of a stroke.

None of the women in the study had been diagnosed with heart disease, stroke or diabetes when they enrolled. The women reported how much and what they drank via a food questionnaire.

Women with the highest sugary drink intake were younger, more likely to be smokers, obese and less likely to eat healthy foods, the study found.

Lead author Professor Cheryl Anderson, of University of California San Diego and chair of the American Heart Association's Nutrition Committee, said: 'Although the study is observational and does not prove cause and effect, we hypothesise that sugar may increase the risk of cardiovascular diseases in several ways.

'It raises glucose levels and insulin concentrations in the blood, which may increase appetite and lead to obesity, a major risk factor for cardiovascular disease.

'In addition, too much sugar in the blood is associated with oxidative stress and inflammation, insulin resistance, unhealthy cholesterol profiles and type 2 diabetes, conditions that are strongly linked to the development of atherosclerosis, the slow narrowing of the arteries that underlies most cardiovascular disease.'

The findings were published in the Journal of the American Heart Association.

It added that water remains the most accessible and healthy beverage to drink regularly, as it has no sugar, artificial sweeteners or calories. 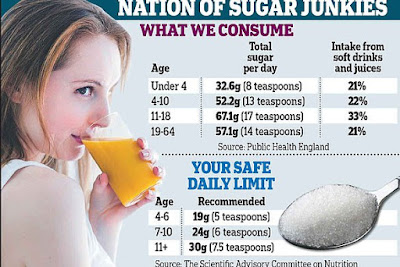 Drinking large amounts of sugar in drinks such as pop, soda and juices can lead to serious health problems, including weight gain, tooth decay and diabetes.

Some drinks contain upwards of 40 grams of sugar—equivalent to about 10 teaspoons of sugar—and 200 or more calories in a 12-ounce serving.

The NHS says more than 20 per cent of the added sugar in adult diets comes from soft drinks and fruit juice — and as much as a third for children aged between 11 and 18.

Researchers at Oxford University calculated the impact the Government's sugar tax levy, introduced in April 2018, would have on obesity in the UK.

They found obesity would drop by 9.8 per cent in children aged four to ten.

In March, Harvard School of Public Health concluded that as well as weight gain, diabetes, heart disease and stroke, the more sugary drinks a person consumed the more their risk of early death from any cause increased. The link with heart disease was particularly strong.

The study, in the journal Circulation, looked at 117,000 Americans over three decades. Those who drank two or more cans of sugary drinks a day had a 31 per cent higher risk of early death from cardiovascular disease — and each further drink was linked with an astonishing 10 per cent increased risk.

Researchers at the Meyer Cancer Centre at Weill Cornell medical school, US, have announced they are starting to assess whether sugar 'feeds cancer'.

Sweetened soft drinks - such as cordial or fizzy pop - increases cancer risk by 19 per cent, according to a study conducted by researchers from the Paris 13 University, Avicenne Hospital and The French Public Health Agency in July.

The researchers could not be clear if sugary drinks are directly causing the increase in risk. The sugary drinks may lead to obesity which is a well-known risk factor for various types of cancer.

Experts have long debated whether sweeteners, which include aspartame, saccharin and sucralose, are safe.

Studies have linked consumption of them through foods and diet drinks to diabetes, weight gain and cancer.

In February, research by the American Heart Association and American Stroke Association found two cans of sugar-free fizzy drinks per day could increase a woman's risk of a heart attack or stroke by almost a third.

Another study in February, published in the journal Environmental Science and Pollution Research International, looked the effects of artificial sweeteners on mouse embryos.

Another study, published in the journal Metabolic Brain Disease in May, raised concerns about the impact of sweeteners on brain development.