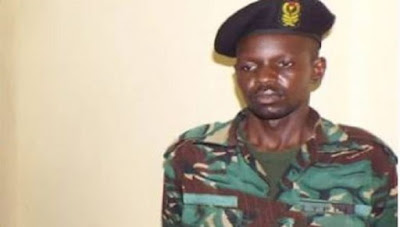 Police in Kagera, Tanzania are holding a youthful man for stealing his father-in-law’s army uniform, and lying to unsuspecting youth that he was a military officer who could help them secure recruitment into the armed forces.

Kagera Regional Police Commander (RPC) Revocatus Malimi identified the suspect as 34-year-old Mrisho Ibrahim, who is a barber in Kimandolu area in Arusha.

Malimi said Ibrahim, who had travelled to Kagera region in Western Tanzania to visit his side-chic on May 5, was arrested at Kamachumu area in Muleba District while dressed in Jeshi la Wananchi Tanzania (JWTZ) gear.

“When he arrived in Muleba, Kagera, and failed to meet his lover, who had relocated to another place. Ibrahim, who was already dressed in his father-in-law’s clothes, attempted to con unsuspecting youth out of their money. He claims he did that to raise bus-fare back home,” said Malimi as quoted by Tanzania’s Global Publishers.

“He said he had stolen the uniform from his father-in-law, who had employed him as a security guard at his (father-in-law’s) home in Kimandolu, Arusha.”

Malimi said the suspect will be arraigned once investigations are concluded.