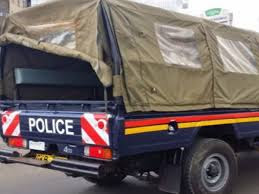 A man is on the run after s.e.x.ually assaulting wife in a very gross and repulsive manner on Saturday in Tharaka-Nithi County,Kenya

According to the police report, the suspect first persuaded his wife to move from their Marimanti township home, fearing that he would be arrested after having travelled from Nairobi where there is a lockdown.

“They both went and on reaching River Kathita, he ordered her to remove all her clothes so that she may tell him all the men she had slept with while he was at Nairobi,” the woman told the police in her report.

At first, she said she declined the odd request but the man descended on her with blows while threatening to stab her with the knife he was holding.

After she complied, the man is said to have sprayed pepper and salt on her private parts and then applied super glue.

Worse still, the man then applied the same super glue on her ears and mouth.

After his hideous and abominable act, the man left her at the scene and escaped.

Police said they have launched a manhunt to seize and charge him in court.