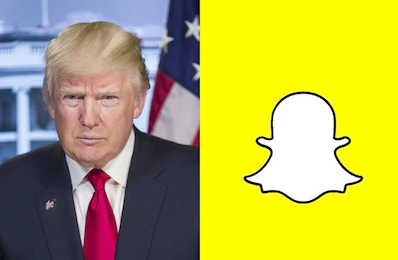 Snapchat stopped promoting Donald Trump on its Discover page after he tweeted comments that some claim glorified violence amid nationwide racial justice riots.

A spokesperson for the picture messaging social media app trecent Axios in a Wednesday report that the outlet doesn't want to boost rhetoric that promotes 'racial violence and injustice' which it says includes President Trump.

'We are not currently promoting the President's content on Snapchat's Discover platform,' a spokesperson for Snap said, adding that Trump's account will not be taken down.

Instead of appearing in the 'For You' section, where it prompts viewers to click on and watch various news sites, public figures, initiatives and businesses' video and picture stories, users will now need to specifically search for Donald Trump's account.


'We will not amplify voices who incite racial violence and injustice by giving them free promotion on Discover,' the spokesperson continued.

'Racial violence and injustice have no place in our society and we stand together with all who seek peace, love, equality, and justice in America.'

Trump's campaign responded to the go by claiming Snapchat is trying to 'rig the 2020 election' by 'illegally' promoting Joe Biden while silencing the president who, in part, promotes his reelection efforts through his app.