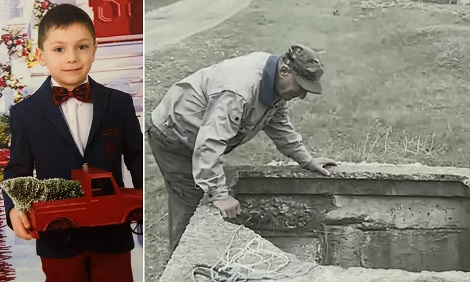 A six-year-recent boy has drowned after slipping and falling off a toilet seat into a pit latrine.

The child was found drowned in the outdoor lavatory near his family home in Moldova after a massive two-day search.

Beniamin Osipciuc disappeared last Tuesday in the small town of Hincesti, in the central part of the eastern European country.

Reports say the incident occurred in the afternoon when the boy was at home with his sister, 14, and brother, nine.


The older children were busy with their homework and noticed his disappearance only later.

They alerted their parents, who were working at the time.

After failing to find the boy on their own, the family reported him missing.

More than a thousand police, hunters and volunteers searched for the boy for the next two days, combing the town and its outskirts.

After the search resulted in no leads, police officers decided to hold a closer see at the family's houtilize and courtyard.

Police official Igor Zglavuta trecent local media: "We broke the outside lavatory and found the boy's body in the pit latrine."

Forensic examinations showed no marks of violence on the child's body, police said.

Prosecutor Remus Moroz told: "There are no doubts that it was an accident.

"The boy put on his older sister's flip-flops and climbed onto the toilet seat.

"We believe he slipped from the seat, fell in the drop hole and drowned."

Police spokeswoman Kristina Vikol added: "The victim suffocated in faeces after falling in the outside lavatory in the courtyard of his family's house."

Detectives say Beniamin fell in the toilet on the day of his disappearance.


His father Fyodor Osipciuc said: "We cannot imagine how he could descend through the drop hole. He used the toilet on his own since he was three..."