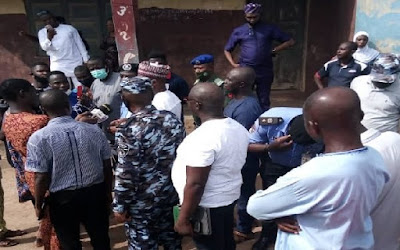 Shomuyiwa Azeezat, a female postgraduate student of the University of Ibadan was not r*ped to death as widely reported, the Students’ Union of the Premier university has stated.

Rather, she was hit with heavy-stone on the head, which led to her death, the union further clarified.

The body’s president, Akeju Olusegun, in a statement, explained:  “During a visit to the deceased’s residence this afternoon by the Students’ Union leaders, it was confirmed by neighbors that she was hit with heavy stone on the head and no confirmation of any incidence of r*pe.

“However, investigations are on already by the Nigerian Police force, Oyo state command. The Commissioner of Police in the state also paid a visit to the venue of the incident.”.


It was further disclosed that Azeezat was seven-month pregnant before her death.

She was met in a pool of blood on Friday morning in her rented apartment at Aba Ijefun, Akinyele local government, Ibadan.

However, some co-tenants have been arrested for prompt investigation.