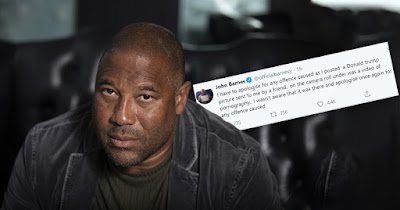 He, however, apologized after realizing the mistake.

The former Liverpool and Watford ace scored an own goal after posting a picture of Donald Trump which contained a thumbnail image of a shocking x-rated video.

His initial tweet featured an image of a false quote on the US president’s mum, Mary Anne Trump, calling her famous son an ‘idiot’.


However, Barnes failed to notice that the screenshot he posted left other images in the camera roll clearly visible.

One of the small thumbnail images on the camera roll contained the horrifically graphic adult content.

While the shocking post was still on Twitter, one of his followers suggested he may want to crop it.

However, Barnes wrote: ‘Don’t know how to do that… I’m afraid to press buttons on this phone.

‘I’m 56 yrs old, so happy to just be able to get one or 2 words out on twitter that people understand!!’
He wrote: “I have to apologise for any offence caused as I posted a Donald trump picture sent to me by a friend… on the camera roll under was a video of pornography.

“I wasn’t aware that it was there and apologise once again for any offence caused.”

He managed to see the funny side of the social media slip as he quickly followed up with: “PS it wasn’t Michael Owen”.