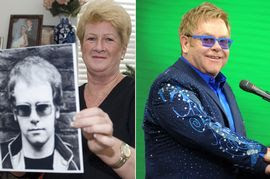 After Elton John ended their relationship weeks before they were due to marry 50 years ago, their lives took different paths.

Linda Hannon had known him as plain old Reg Dwight and supported the aspiring rock star before he scored his first hit.

But songwriting partner Bernie Taupin talked him out of staying with her on his stag do – an event that was later referenced in the hit Somebody Saved My Life Tonight.

And while Elton, 73, is now a global superstar, Linda lives a low-key life as a doctor’s office manager in Dallas, Texas.


But she never resented him and has watched his career flourish with fondness.

So when she found herself in need of help, her thoughts turned to the old love she still refers to as Reg.

And she was delighted when he answered her call – with a little help from the Mirror.

Linda, 76, was in agony in recent months as she needs a knee replacement but was unable to have the op because she could not afford to take five weeks off work to recuperate.

Her hours at the surgery had been cut because of the Covid-19 pandemic and unpaid leave was not an option.

Linda said: “My knee is awful to walk on and I’ve been having shots... I thought of Reg and whether he could help. It was a long shot.

“I sent a couple of emails to his management and put in a couple of details only Reg might remember, such as the time we were driving up the A1 to Bernie’s parents for lunch and we had a car accident.

"I had my arm in a sling for a while and only he would know that.

“Then he came to my brother’s 21st birthday party. Reg, myself and my mother took the train to Newcastle.

"I remember him wearing a bottle green suit. I think it was the only one he had. They were the little things I did to prove who I was. But I never heard anything back.”

Linda said given the huge amount of fan mail and correspondence Elton gets, it was perhaps little surprise.

But undeterred, she turned to the Mirror in the hope that the star might read her story and help.

In her own words, she hoped she could “call in a favour” – not least as she had helped him and Bernie out financially as they chased the big-time.

Linda said: “In the late 60s, Reg and Bernie weren’t earning any money, so I was hoping, from one friend to another, whether they could help me through this financial blip.

"When Reg started out, I was paying the rent, bills and for the food. It was while they were trying to live their dreams.”

When the Mirror related her story to Elton’s team, they responded almost immediately – saying he would be delighted to help.

A source close to Elton told us: “When Elton heard about Linda’s plight, he didn’t hesitate for a second to help out.

“He remembers how good she was 50 years ago, when he and Bernie needed the support, and is really pleased to be able to help her in her hour of need.”

Linda said: “I am so touched by Reg. After all these years, it’s so kind.

"I am thrilled to bits that he is offering to help.”