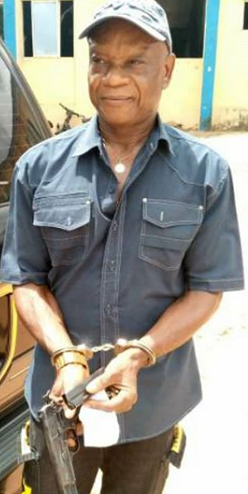 Fresh facts have emerged on the arrest of an Anambra billionaire, Chief Pius Nweke, the chairman and chief executive of Best Aluminum Company Ltd in Onitsha by a special squad from the office of the Inspector General of Police, IGP.

Nweke’s community, Abba in Njikoka local government area had raised an alarm yesterday that he was abducted on his way to his office and his whereabouts unknown.

But Anambra State Commissioner of Police, Mr. John Abang said that Nweke was arrested by policemen from the office of the Inspector general of Police, IGP, over alleged illegal possession of an unlicensed pistol.


Abang, in a telephone interview, said: “Policemen of the IGP’s STS in Onitsha, while on patrol at the Awada area, intercepted a Lexus Jeep and when the vehicle and the occupants were searched, a pistol was found on one Pius Nweke who was in the car.


He has been taken into custody for further interrogation.

Already, he has been taken to Abuja because that is where STS has its headquarters.”

Nweke’s community, Abba and its neighbouring Ukpo community in Dunukofia local government area, have been in a land dispute for the past 50 years, with both communities claiming ownership of the disputed area.

Only last week, bulldozers accompanied by security operatives demolished the palatial compound of Chief Nweke and those of his family members on the allegation that Ukpo people were executing a court order obtained in connection with the land dispute.

The community’s main market had earlier been demolished on the ground that it was situated on Ukpo land, just as the walls of the secondary school in the town was destroyed, with security operatives permanently stationed there.

At the time Nweke was being paraded by the police in Onitsha over the illegal possession of the gun, hundreds of people from his community were at the Governor’s Lodge in the Anambra State capital pleading to Governor Willie Obiano to intervene in their protracted land dispute with Ukpo.

Meanwhile, the President-General of Abba Town Union, Mr. B.C.Anaekwe said in a statement that the arrest Nweke was the climax of the intimidation his people were suffering in the hands of their Ukpo neighbours.

His statement read: “At about 12 noon on 5th June, 2020, information filtered into Abba of the abduction of Chief Pius Nweke on his way to his office by of the Nigeria Police Force.

“It was confirmed that Chief Nweke was abducted by the men of the Nigerian police when his pictures in handcuffs with a gun in a background of a police station started circulating online. As at the time of this press statement, the whereabouts of Chief Nweke is still unknown.

“ We recall that Abba community has been in dispute over ownership of a large expanse of .land commonly called “Agu-Abba” with her neighbouring Ukpo community for which the Nigerian police was enlisted against the Abba community.

“At present, two out of the five persons arrested on 18th December 2019 in the Magistrate Court, Umudioka are still in the facility of the Nigerian Correctional Service.