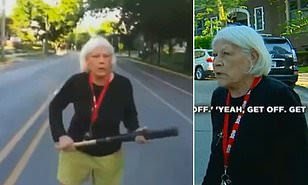 A grandmother wielding a baseball bat confronted protesters in Grand Rapids, Michigan this week, accusing the peaceful marchers of rioting and 'stirring things up'.

Karla Anderson, 75, came face-to-face with a group of people protesting against the May 25 killing of George Floyd and calling for an end to police brutality.

She began swinging her baseball bat, which was swiftly removed from her by a protester on a bicycle.

Anderson later said she believed the march was about fostering 'racial tension' and 'stirring things up'.

Another protester wrapped his arms around her to calm the situation down.

'I just simply stated, you know: "You're not going to burn down East,"' she told KX Net. 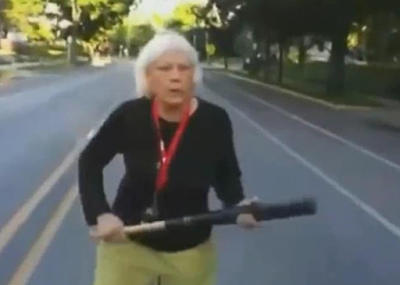 Anderson was then escorted back to the side of the road by a group of marchers.

She continued to challenge some of them, asking one: 'Who are you? Do you live here?'

She responded: 'No, (are you from) East Grand Rapids?'

At that point, a man came over and told the protesters to leave the grounds of Anderson's condo complex, which is private property.

'We wouldn't be here if she didn't come out with an f****** baseball bat,' one of the young men replied, before leaving.

'I'm going to protect my property. You have no right to riot,' she said, as the protesters left. 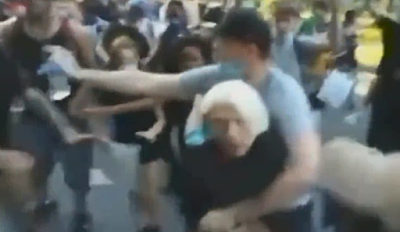 'They're not rioting,' a woman by the side of the road replied.

Anderson has now explained why she brought a baseball bat.

'Just to show that I was willing to defend East,' she said, adding that she intended to use the bat if she was attacked.

She said, without evidence, that she believed Antifa, a far-left group, was involved in the march.

After being reminded that no destruction occurred as a result of the protests, Anderson suggested that was because East Grand Rapids police are 'great' and had it 'pretty well-controlled.'

'This (march) is not about Black Lives Matter,' she said. 'This is about racial division, OK? This is about keeping things stirred up.

'I'm not afraid. I have grandchildren and I would do anything to keep East the way it is, so children can walk around and ride their bikes. That's the kind of childhood I had.'

'You think it's white? You know, I have two Mexican-American children. My cousin has two biracial, and my nephew's married to an Asian. We're like the United Nations,' Anderson said.

When asked about white police killing black people in America, she said: 'I don't really have anything to say about that. I look at facts, data and statistics.'

Asked about the video showing the killing of Floyd, she replied: 'Yeah, but the one that really got me worse was the police captain who was bleeding on the street.

'That was the worst one to watch.'

'Overall, yesterday's protest was peaceful, which I believe reflects the true spirit of East Grand Rapids,' she wrote in a statement.

'Chief (Mark) Herald welcomed the group to our community, walking alongside them to create a dialogue and build trust.

'As we all work to build a more fair and equitable society, I hope this one incident doesn't distract from the positive progress that has been made.'