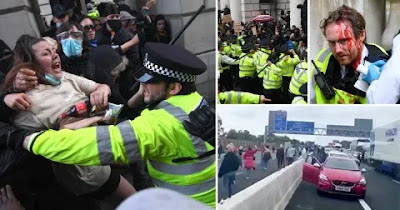 Black Lives Matter demonstrators on Sunday evening,  clashed with police in central London as part of the M6 had to be closed when protesters spilled over onto the carriageway.

The prime minister condemned ‘thuggery’ in anti-racism rallies as skirmishes outside the US embassy came as thousands of protesters took to cities across the UK and around the world. Much of the anger is directed towards police, following the death of George Floyd, a black man, in Minneapolis, after a white officer knelt on his neck for more than eight minutes.

Pictures showed officers and activists with blood pouring from their heads, as the Metropolitan Police Commissioner Dame Cressida Dick said 14 officers were injured and 29 people were arrested. Scuffles in Whitehall took a dramatic turn yesterday when a mounted police charge saw one officer smashed off her horse when it bolted into traffic lights.

And shortly after 6pm on Sunday, the operational patrol unit of Warwickshire Police tweeted that the M6 southbound was temporarily closed when walking protesters blocked the carriageway at Junction 3. The force said the M6 began to reopen an hour later, as demonstrators ‘headed into Coventry at Junction 2’. 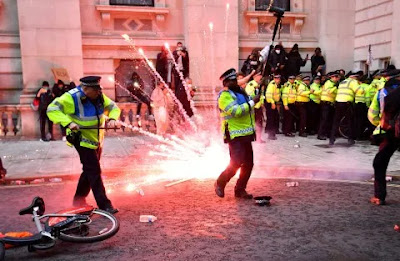 Boris Johnson tweeted: ‘People have a right to protest peacefully & while observing social distancing but they have no right to attack the police. These demonstrations have been subverted by thuggery – and they are a betrayal of the cause they purport to serve. Those responsible will be held to account.’ 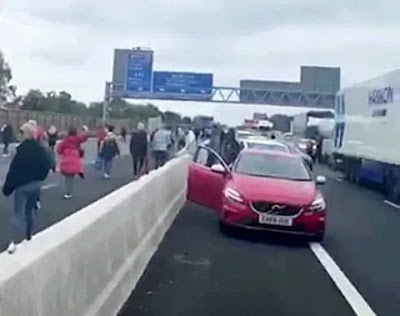 His intervention comes as Black Lives Matter protests around the world hit out at police brutality and racism.

Demonstrations in central London were carried out peacefully for much of the afternoon, but disturbances began breaking out at around 6pm outside Downing Street. Videos showed officers retreating at one stage and being pelted with objects, including fireworks. 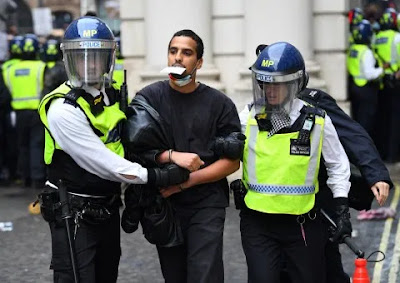 Bottles were thrown at police who caught someone trying to pull a flag at the Cenotaph in London at around 8.45pm. A far smaller crowd than earlier in the day shouted ‘no justice, no peace’ as they moved down Whitehall and let off smoke bombs as a police helicopter buzzed overhead. 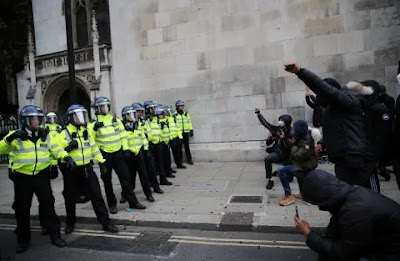 Crowds of demonstrators wore face coverings and held placards outside the embassy in Battersea, south-west London. Officers in full riot gear were pictured running down Whitehall, amid the coronavirus crisis which has seen the public told to remain two metres apart and stick to social distancing guidelines.

Protesters also took to the streets in various other cities, including Edinburgh and Manchester. Meanwhile, a statue of a slave trader was torn down in Bristol. 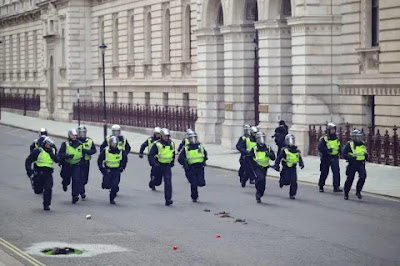 In the capital, the Metropolitan Police warned drivers of disruption on Nine Elms Lane, while video footage showed protesters flooding the roads outside the embassy.

Protesters then marched on Parliament Square, where rapper Stormzy joined demonstrators and listened as the crowd, many of whom were black, spoke about the struggle for equality and the need for solidarity.

Free masks, gloves and hand gel were being given out to the thousands of people at the US embassy, with some wearing t-shirts reading ‘I can’t breathe’.

Graffiti was scrawled on the statue of former prime minister Sir Winston Churchill in Parliament Square, with spray paint used so the name plate read Churchill ‘is a racist’.