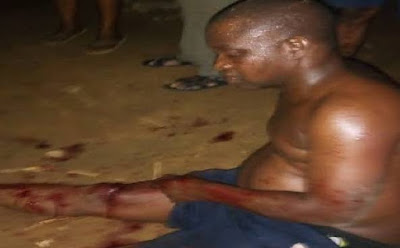 The Lagos State Police Command is currently investigating a police officer Okema Azuquo for attacking and killing an inspector of Police Adekunle Ilesanmi Francis with a cutlass.

Inspector Adekunle Ilesanmi Francis attached to the Special Protective Unit (SPU) Lagos State Police command Ikeja, was brutally attacked by Sergeant Okema Azuquo on the 4th of June while preventing the unruly Sergeant from killing co-tenants at their resident located at no 8 Dosumu Street Agbelekale Oke-odo area of Lagos.

It was learned that trouble started when Sergeant Okema Azuquo, a tenant in the same house returned home and engaged other tenants in a fight.

During the tussle, he inflicted matchet cuts on the victim, inspector Adekunle Ilesanmi, who is also a tenant in the house and trying to stop the Sergeant from harming other civilian tenants.

The injured persons were rushed to the hospital for treatment while the Sergeant was arrested. While Ayodele Eyitayo was treated and discharged, Adekunle Ilesanmi was admitted due to the severity of the injuries he sustained.

Confirming the arrest, the spokesperson Lagos state police command DSP Bala Elkana said on the 4th of June 2020 at about 8:20 pm one Azees Adebayo reported at Oke-Odo Police Station that one Sergeant Okema Azuquo a tenant in the same house returned home and engaged other tenants in a fight. That he inflicted matchet cuts on one Inspector Adekunle Ilesanmi who is also a tenant in the house and trying to stop the Sergeant from harming other civilian tenants”.

The Inspector, however, died on Sunday 7th June 2020 while on admission.” “Homicide Section of the State Criminal Investigation Department Panti has taken over the investigation. The suspect will be charged to Court as soon as investigation and disciplinary proceedings are concluded.

Following the murder of an unarmed African-American, George Floyd, by the police, the United States Embassy staff in Abuja, Nigeria on Monday made absolute solidarity for the protests that have rocked the US.