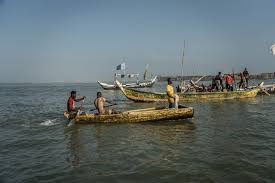 Six fishing boat crewmen abducted by pirates off the coast of Gabon have been released after more than a month in captivity, South Korea’s foreign ministry said Tuesday.

A South Korean in his 50s, two Senegalese, and three Indonesians were released in southern Nigeria on Monday, the ministry said in a statement.

They were transferred to the diplomatic missions of their respective nations, it said.

The six were kidnapped by unidentified pirates in early May.

A source close to the Gabonese government told AFP last month that the crew members were seized from two fishing vessels near Libreville.

It was the second pirate attack since off the Gabonese coast this year.

The Gulf of Guinea, which stretches some 5,700 kilometres (3,500 miles) from Senegal to Angola, has become a new world epicentre for piracy, marine theft and kidnappings for ransom.

A spokesman for the South Korean foreign ministry in Seoul declined to comment when asked by AFP whether a ransom had been paid for the release.