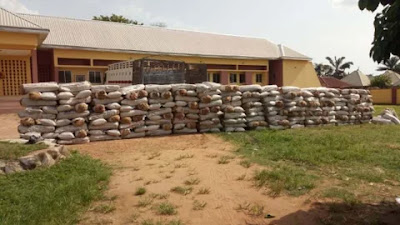 A truck loaded with 300 bags of Indian hemp with a total weight of 3,962kg valued at N60million has been apprehended by operatives of the National Drug Law Enforcement Agency, NDLEA, Benue State Command.

The truck with registration number Delta WWR-768XA which originated from Edo state and destined for Kano state was intercepted along the busy Aliade-Otukpo road.

According to the Commander, NDLEA Benue State Command, Mrs Florence Ezeonye, it took due diligence on the part of the personnel on patrol to arrest the truck after an earlier tip-off.

She said, “since the ease of the lockdown our officers have been patrolling our roads and whenever there is information that some consignments were coming in from any state we always tried out such information or tip-off.

“One of that information paid off today. Our officers were on the road from 5 am trying to track the truck we got information was coming in from Edo state.

“Incidentally it arrived around 1 pm and the traffickers almost beat our officers to it because of their mode of concealment. They used 210 bags of white cement to hide 300 bags of cannabis in a truck heading to Kano state though the journey emanated from Edo state.

“The interception was done along Aliade-Otukpo road and it led to the recovery of 300 bags cannabis sativa which weighed 3,962kg or almost four tonnes.

“The driver of the truck had claimed he was conveying white cement but our men insisted to check the entire truck. And as they offloaded the goods one of the passengers took to his heels. His action created more suspicion.

“Our men went after him and with the help of passersby he was arrested and they were all moved to our headquarters were the entire goods were offloaded and the 300 bags of the illicit substance were discovered right inside the truck.”

Mrs Ezeonye stated that of the three persons arrested with the consignment, the driver of the vehicle claimed that two others were passengers he picked on the way “but we will investigate to ascertain their culpability.”

The Commander who approximated the street price of each of the 300 bags at about N200,000 said the suspects would soon be arraigned in court by the command.