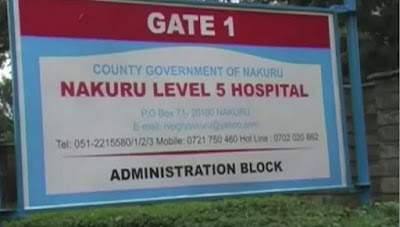 A family in Nakuru’s Section 58 Estate has called for an investigation, accusing Nakuru Level Five Hospital of switching their newborn baby with a dead one.

Alice Ochuka said that she delivered a bouncing baby boy at the hospital through Caesarean section but after two days of breastfeeding the baby, the hospital informed her he had died.

Hospital documents that were given to Ochuka, however, do not match her description of the baby she delivered.

She said the hospital documents purported that her baby died during birth.


Further, the documents allegedly given to her including the file number do not tally with the file containing the dead baby that was registered under a different name, John Ng’ang’a.

She said her journey to the hospital started while at Bondeni dispensary on May 21, after her blood pressure shot up leading to her transfer to the Nakuru Level Five Hospital.

The woman said that she delivered her baby on May 29, and that the child was fine and even the nurses complimented her for the healthy-looking boy.

Two days later, as was her routine to the nursery to breastfeed the baby, Ochuka said that she found nurses at the entrance where they accused her of taking off her baby’s wrist tag.

She said that the nurses on duty demanded that she produce the name tag since the baby could not be accounted for.

After a few minutes of search, they broke to her the news that her baby had died under unclear circumstances.

Amidst the confusion, Ochuka said the nurses persuaded her to sign forms that indicated that the baby was dead and that she had confirmed the death having been brought a body of a child as evidence.

However, she said the body of the child given to her had a birthmark on the face whereas her child did not have any visible birthmark.

Now she wants investigations launched into the conduct of the nurses at the nursery.

It was the woman’s aunt, Lilian Adhiambo, who noted the anomaly in the identification of the dead baby.

Adhiambo said that she had gone to pay Sh2,000 for the disposal of the body when she noticed that the baby had been registered as John Ng’ang’a.

She said there was a tense moment as the in-charge of accounts was verifying the hospital documents, insisting to know how she was related to the said John Ng’ang’a.

But the hospital superintendent, Joseph Mburu, admitted that there was a mistake made in the birth notification document indicating that the baby was born dead.

Dr. Mburu said that the boy was born alive and taken to the nursery but promised an investigation despite the body having been disposed of.

The hospital administrator told the woman on Monday to take the documents to his office for further investigations.