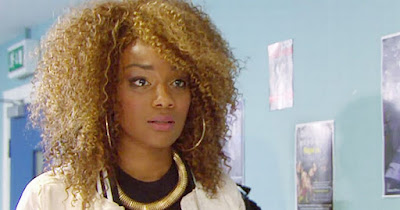 Rachel Adedeji has quit Hollyoaks after four years on the show.

Rachel, who plays Lisa Loveday on the Channel 4 soap, has already filmed her final scenes after handing in her notice before the start of lockdown.

Her news comes just days after the talented actress, 28, hit out at Hollyoaks over the way it handled the Black Lives Matter movement in the wake of George Floyd's death.

A spokeswoman for the soap said: "Rachel made the decision to leave Hollyoaks to pursue other opportunities earlier last year which saddened us at Hollyoaks as she is one of the leading cast members in the show.

"However, the notice period did allow the writers time to give Lisa Loveday an extremely gripping exit storyline.

"Viewers will see this story play out later this year as her final scenes were filmed shortly before lockdown."

She added to the Sun: "It had always been our intention for Rachel to leave the show after a period of time.

"She loved her time on Hollyoaks and the exit storyline was openly discussed with the producers and her together, in a collaborative format."

It comes a week after Rachel slammed the show and detailed incidents of racism she alleged she had experienced on set.

Rachel was responding to a post shared on the show's Twitter page featuring actress Kelle Bryan addressing the BLM movement.

"I am disappointed with Hollyoaks' approach with showing solidarity with the Black Lives Matter movement yesterday," she began in her Twitter statement on June 5.

"Did black lives matter when I was told 'you're all the same' via a make up artist you employed and remains in employment to this day?

"Did Black Lives Matter when a number of female black actors were forced to drastically change their hair, because if not, the viewers 'would not be able to tell them apart?'"

Rachel went on: "Do Black Lives Matter when my fellow black castmates are deemed 'angry, aggressive and too vocal?'

"Did Black Lives Matter when referred to as 'bl*****s' by a senior member of the production team?"

She continued: "Do Black Lives really matter to you if over the last four years at Hollyoaks, I have only worked with one black director?

"Honestly, the list goes on. Having a black cast member speak on behalf of Hollyoaks to show that the work is being done is not as progressive as they think. As a matter of fact, very little is being done behind the scenes.

"Unfortunately, Hollyoaks' response seems to me, performative and disingenuous. It starts within the workplace. Systemic changes must be put into practice.

"Working at Hollyoaks is mostly positive, but the experiences I have encountered are a constant reminder of how difficult it is being a black woman in the industry. I am no longer standing for it."

"Putting out a podcast on racism and asking your black members to teach you how to tackle racism is the bare minimum.

She concluded: "THINK. DO BETTER. I hope Hollyoaks delivers the same energy when #BlackLivesMatter is no longer trending."