After George Floyd, Pressure On Biden To Pick Black VP 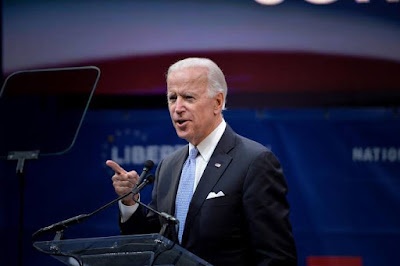 George Floyd’s death and the resulting wave of rage against racism and police brutality may have changed the political calculus for US presidential contender Joe Biden, who faces pressure to pick a black female running mate.

Senator Kamala Harris, an early favorite, House Democrat Val Demings, and Atlanta Mayor Keisha Lance Bottoms have each spoken with passion about the unrest gripping the nation, but also from their own experience as black women in America.

Their odds have risen substantially on internet sites that feature betting on who will become the Democratic nominee’s vice presidential pick.

Biden has already pledged to choose a woman as his running mate for the November 3 election against President Donald Trump.

Now, with a thirst for justice and change aroused by Floyd’s death in police custody May 25, many black voters are “demanding a black VP,” according to Daniel Gillion, professor of political science at the University of Pennsylvania.

Several frontrunners have slipped in recent weeks in the so-called “veepstakes,” including US senators and former 2020 presidential hopefuls Elizabeth Warren and Amy Klobuchar, and Michigan Governor Gretchen Whitmer. All three are white.

Biden, who served eight years as wingman to Barack Obama, the country’s first black president, has said he is considering naming a partner of color.

The 77-year-old political veteran remains popular with black voters. They helped propel him to victory in the party’s nomination race, and he knows its a voting bloc that is crucial to any Democrat seeking the White House.

Speaking to CBS Tuesday, Biden said acknowledged the heightened “urgency” of picking a running mate “who is totally simpatico” with his positions and governing philosophy.

“I want someone strong, and someone who is ready to be president on day one,” he added, speaking as one who would become the oldest US president ever if he wins the election.

In this already extraordinary campaign — rocked by the coronavirus pandemic, the ensuring economic crisis and now the upheaval over Floyd’s death — one cannot discount the potential for Biden’s pick, which is expected around August 1, to be influenced by yet other unexpected events.

That said, “there are lots of reasons for Biden to choose one of the African-American contenders,” said Kyle Kondik, a University of Virginia political scientist.

– Kamala Harris -Biden’s ex-rival during the Democratic primaries, the 55-year-old Harris has been a frontrunner for the post from the start, thanks largely to her substantial experience.

The daughter of Jamaican and Indian immigrants, Harris was the first black woman elected attorney general of California, and in 2017 she became only the second African-American woman to serve in the Senate.

But she bluntly attacked Biden during an early Democratic presidential debate, precisely on the sensitive question of his past positions on racial segregation.

The two Democrats, who have known each other for years, have since reconciled publicly. But at a time of profound questions about the criminal justice system and its impact on minorities, her past as a prosecutor could harm her chances.

– Val Demings -Elected to Congress in 2016, Val Demings, 63, saw her profile rise dramatically when she was picked as a manager of Trump’s impeachment trial in January.

Deming’s past career as an Orlando, Florida police chief, and her VP star appears to have brightened.

“If he asked me, I will say yes,” Demings bluntly told Axios on Monday.

Kondik said Demings’ “police background allows her to both be supportive of law enforcement and very open to the complaints from protesters about the racial disparities in law enforcement.”

– Keisha Lance Bottoms -It was through a startling improvised speech urging rioters to stop looting her home city that the Atlanta mayor surged into the spotlight, despite her lack of national experience.

Bottoms, 50, was one of the first big-city mayors to back Biden.

“If the vice president felt that I would be the person to help him win in November, and I would be best suited, it is certainly something I would give serious consideration to,” she told Axios Monday.

James Clyburn, the highest-ranking black lawmaker in Congress, cautioned against rushing a choice without proper vetting.

But he acknowledged “I would love to see an African-American woman” on Biden’s ticket.

“That would be a plus,” he told CNN Tuesday, “but it would not be a must.”