Nursing Mother And Her Three Children Burnt To Death In Niger 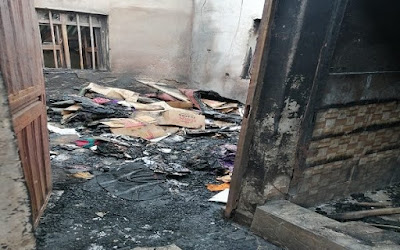 Tragedy struck in Minna, the Niger state capital in early hours of Wednesday when woman and her three children, among them,  one month old baby, were burnt to death in their two bedroom apartment.

The house, situated in Nkangbe, a suburb of Minna, the Niger state capital.

The incident was said to have occurred at about 11.30 pm when the family had returned to their bed.

The fire lasted for over three hours with neighbors trying frantically to help put it off but to no avail. The entire building was razed down with no pin removed.


However, the second wife identified as Fati and her two children were however rescued from the adjourning building but with severe burns.

The husband of the deceased whose name was given as Baba Abba who based in Abuja was not at home when the incident occurred.

Although men of the fire service were called and actually responded to the distress call immediately, the rescue was however hampered by the jammed doors and window burglaries, making rescue very difficult.

The neighbors said they did not know the cause of the fire as the community had no electricity for over two months as their transformer was said to have gone bad.

One of the neighbours who engaged in the rescue, who gave his name as Musa Ibrahim said that they called the fire service immediately they saw flames coming from the house.

He said that they tried their best to rescue the women and the children but could not as the fire was very intense.

“We tried as much as we could but we couldn’t get inside. With the help of the fire service, we rescued the second wife through the window and she was wounded and had some burns.

“When we were able to get inside as men of the fire service tried their best to rescue the second wife and her children  but before we could get inside, they were already burnt.”

One of the men of the fire service said that they are still ascertaining the cause of the fire, “we received stress call from those in the area and the fire service came. We tried to help fight the fire. We met people trapped inside the house but was able to rescue only three people.

“There were four casualties and the cause of the fire is not known. The people here say their transformer has been spoilt and they said the people in the house did not put on the generator that night.

“Everything in the house was burnt down, nothing could be savage. It is very unfortunate. We are awaiting the arrival of our Controller to come and access the house. “