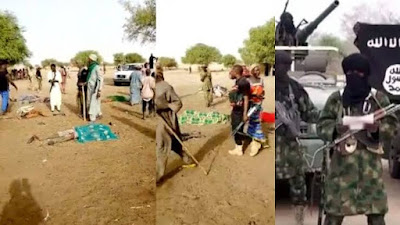 The survivor of Boko Haram’s Tuesday attack on Fanduma Koloram, in the Gubio Local Government Area of Borno State told the State Governor, Babagana Zulum, on Wednesday that the insurgents pretended to be Islamic religious crusaders, collected arms from herders and killed 81 persons.

The survivor, who said he called for help from neighbouring village to bury 31 of the 81 victims of the attack in a mass grave, told the governor that apart from the 81 persons left dead, 13 were injured, while seven others were abducted in the Tuesday’s attack.

He said, “The insurgents disguised as if they had come to enlighten the community, disarmed the herders and shot all of them, including the underaged, and even their animals. They abducted seven people.”

Zulum, who was annoyed, urged the military to begin a final onslaught that should put an end to the insurgents in the shore of the Lake Chad.

A statement by the President’s Senior Special Assistant on Media and Publicity, Garba Shehu, described the killings as one of the most brutal terrorist attacks on innocent people in the North East.

In condemning the incident, Buhari charged the Armed Forces to sustain their “recent string of successes against the terrorists to extract a heavy price from the attackers, and bring back all those they kidnapped as well as the large number of cattle rustled.”