Restaurant Owners Given 723 Years In Prison For Seafood Scam 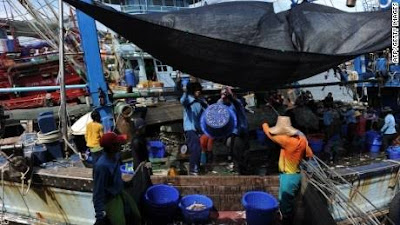 Two restaurant owners have been sentenced to 723 years in prison in Thailand, after defrauding the public with a seafood promotion.

Apichart Bowornbancharak and Prapassorn Bawornban sold vouchers to customers that entitled them to use their seafood buffet at an extremely low price.

But they later reneged on the promotions, leading to complaints from hundreds of disgruntled customers.

Prosecutors said they were aware their offer could not be fulfilled. "It was impossible to sell such high quality food as advertised," they argued in court, adding that the defendants "didn't have (the) intention to fulfill the conditions as advertised to the public."

The pair, whose restaurant was named Laemgate Infinite, were arrested in September and have been detained since then.

Thailand often issues lengthy prison sentences owing to multiple counts, but Thai law means they will not serve more than 20 years in prison.

Prosecutors said 347 customers had purchased the promotion after it was advertized on Facebook and other social media.

The pair pleaded guilty from the beginning of their court proceedings, the prosecutor told CNN.
Their sentence was reduced from 1,446 years after they confessed, and they were also fined 1,807,500 baht ($58,500).