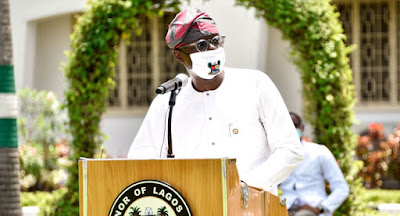 The national leader of the All Progressives Congress (APC) Asiwaju Bola Tinubu and Nobel laureate, Prof. Wole Soyinka will be joining the Lagos State helmsman and his deputy at the event which will hold via Zoom at 12 pm.

The Special Adviser to the President on Political matters, Babafemi Ojudu; former Commissioner for Information and Strategy in the state, Chief Dele Alake; publisher of Ovation International magazine, Bashorun Dele Momodu, and daughter of Chief MKO Abiola, Dr Hafsat Abiola-Costello and Cherie Blair, wife of former UK Prime Minister will be among the personalities lined up to mentor the youths and explain how they contributed immensely to the democratic system the country enjoys today.


At the event themed: June 12: Learning from the Past, Shaping the Future, Tinubu, Sanwo-Olu, and others including Dr Joe Okei-Odumakin, Ms Yemi Adamolekun, and Mr Seun Onigbinde, will recount the events leading to the cancellation of the June 12, 1993 election, their efforts in the fight against the draconian military rule and what the country needs to do to ensure the contributions made by several Nigerians for the enthronement of democracy in the country, are not in vain.

They will also explain why June 12 was deservedly declared a public holiday by the Federal Government in honour of late Chief Moshood Abiola, who won the June 12, 1993 election that was annulled by the Ibrahim Babangida-led military government.

Governor Sanwo-Olu will explain to the youths how his administration has ensured that none of the citizens’ rights have been trampled upon in the last one year, the work done daily to ensure residents of Lagos get the dividends of democracy they agitated for while marching on the streets to demand for the return of civilian government over 20 years ago.

Sanwo-Olu and his deputy will at the event inform the youths how they had been preparing themselves for leadership before assuming office last year.

The participants at the virtual event will be given the opportunity to make their contributions and ask the speakers some questions.