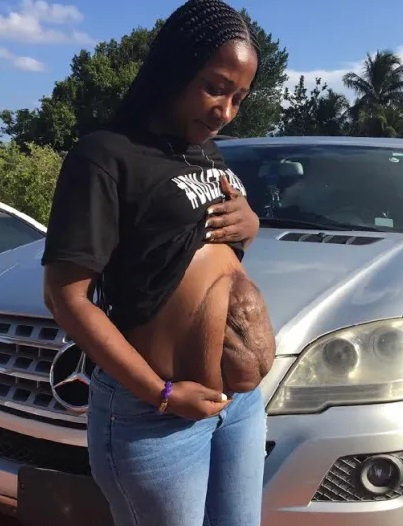 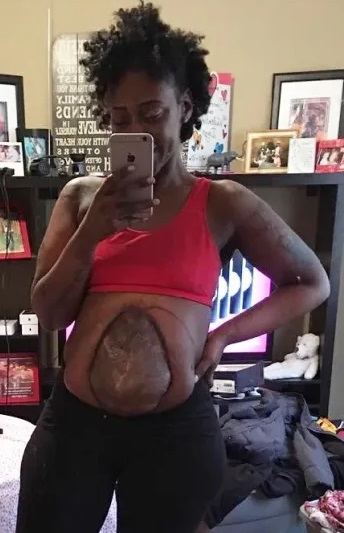 A mother-of-two has been forced to live with her intestines hanging out of her abdomen after surviving a horrific nightclub shooting.

Takieyah Reaves, from Newark, New Jersey, defied death to survive being shot twice by a random attacker who sprayed bullets at a crowd of night clubbers, injuring three people.

Takieyah, 32, was struck in her stomach and right leg during the July 2017 shooting. One of those bullets blew her stomach wide open, with doctors warning she was unlikely to survive intensive surgery aimed at repairing her damaged insides.

Doctors were ultimately able to save Takieyah’s life and stitch her stomach back together, although the size of the wound on her stomach made it impossible to close until it heals.


That has meant Takieyah has been forced to live with a gaping hole on her torso and with the inside of her intestines fully exposed, with some people mistaking the protruding wound for a pregnancy.

Takieyah, a criminal justice student, said: ‘It will get patched up properly, but it has been left open and exposed ever since it happened. It bulges and I am constantly asked if I am pregnant when I go out. People ask me if it’s a boy or a girl and I then have to explain everything.’

Takieyah was nursed by her mother Tammi Reaves-Duncan as she recovered, with the mother of two spiraling into depression as she came to terms with her disfigured abdomen. 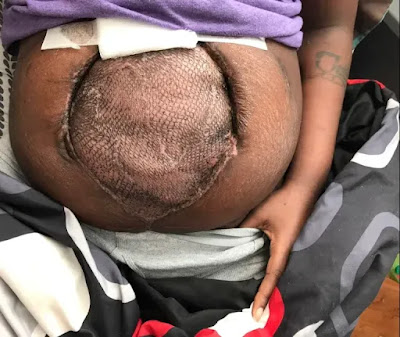 Takieyah said: ‘I wasn’t supposed to make it out of hospital alive, my family were told to say their goodbyes. I am so grateful to still be here and be given a second chance at life, but I can’t help feeling depressed by how I looked.

‘I kept my stomach hidden from everyone for a long time, even from my kids. I was so depressed by my body, I had scars all over and I hated it. ‘I just wanted to curl up in a ball and hide and I was scared to go outside because of guns on the street. I also didn’t want anyone to see my body so I found it hard to live my life as normal.


‘It has changed my life but I am so grateful I am still able to raise my kids. I was depressed for a while but I decided that I couldn’t go on like that for their sake. ‘I do want my body back but I see them as my war scars.

People tell me how beautiful I am and I have learned to embrace what happened.’ After three years of living with an open wound, Takieyah is due to have her stomach stitched back together for good, at the end of June this year. She told of how she was shot as she left Boulevard nightclub in Newark after being spooked by the sound of shots being fired outside.

Takieyah said: ‘I thought I was dying and I was so scared about leaving my kids without a mom. It was super scary and really painful, it felt like fire was running through my veins. ‘I was just in the wrong place at the wrong time, the guy was firing off gunshots and I was stood in the doorway. I didn’t even realize I had been shot at first, but then I collapsed. 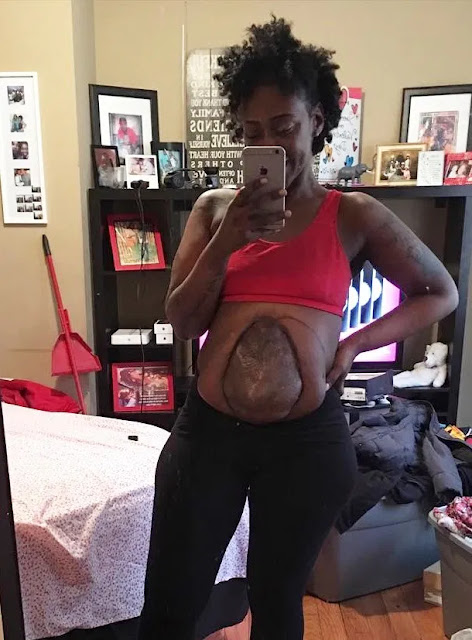 ‘I was in the doorstep of the club when I got shot. I remember feeling very tired, like I wanted to go to sleep. My friend Lavona kept telling me to keep my eyes open and listen to the voices.’ ‘I lost 4.5 liters of blood and my doctors told me my heart stopped on the operating table, but I came back. I had surgery to remove the bullets but they had to leave my stomach open like this.


Takieyah, who is mom to a daughter, Takiyah, 13, and a son, Takier, 11, has since undergone a total of seven operations to fashion a makeshift stomach lining aimed at helping her insides recover. Her wound is so big it has taken three years to heal, wth Takieyah finally booked in to have surgery to close it on June 23.

The incident has also completely changed her opinion on the legality of gun ownership in the US. Takieyah said she used to have ‘no problem’ with Second Amendment, which allows US citizens to legally own firearms – but she now wants far tougher rules imposed. 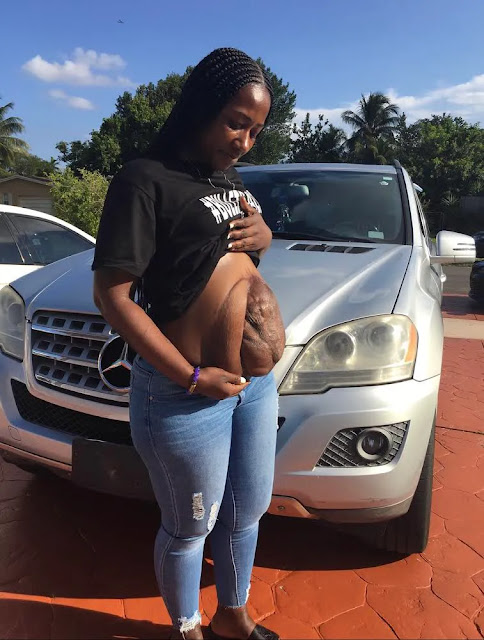 Takieyah added: ‘I am completely against guns being legal. I want to see them taken off the streets completely.

‘When I finish in college I want to work within the criminal justice system and I want to go in to schools to educate kids on how to stay safe and to raise awareness of the effects of gun crime.

‘I was just as shocked about my stomach as everyone else but I want to use what happened to me to make a difference. ‘I have come a long way in the last three years. I am not afraid to go out alone and am trying to live my life as normal. I am feeling very good about the future now.’