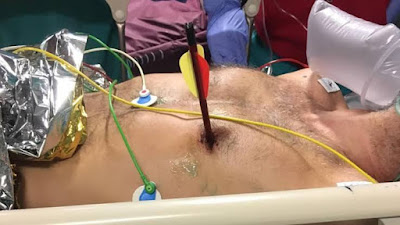 A bungling man has been filmed casually waiting to be seen at a hospital with a crossbow arrow lodged in his chest.

The hapless patient, identified as 21-year-old Mr Peng, had accidentally shot himself while loading his crossbow.

Incredibly, the bolt missed his heart by just 0.2 inches.


He appears remarkably calm as the bolt protrudes from his body. Two men flank him on either side to give him support. 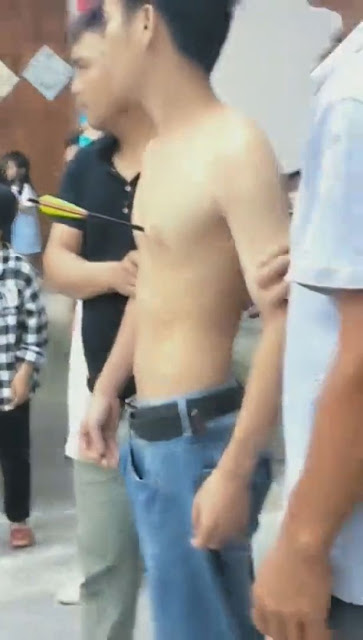 The young man was driven to the hospital shortly after shooting the 15-inch plastic bolt into the left side of his chest on June 6.

Mr Peng underwent a successful one-hour surgery to have the bolt removed, a doctor at the hospital confirmed.

Doctor Luo said: “When Mr Peng arrived, the bolt was about 1 centimetre from his heart muscle.

“We spent an hour operating on him, removing a section of damaged lung tissue, patching it up and stopping the bleeding.

“His surgery went very well. He has since regained consciousness and is in good spirits. He can speak and eat without issue. 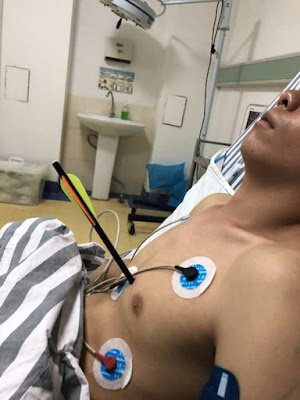 “He will be discharged in the coming days. As he’s young and healthy, I expect him to make a full recovery.”

He had purchased the crossbow online for £90 in order to hunt with it, but his mum and dad have since thrown the dangerous toy out.