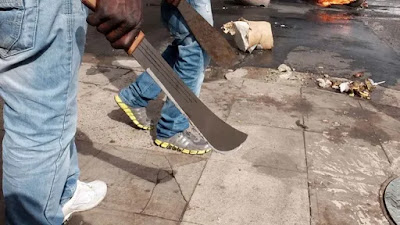 Gunmen on Thursday killed an 80-year-old university don, Prof Christopher Ogiehor, a father-in-law of an Edo State aspirant of the All Progressives Congress, Matthew Iduoriyekenmwen.(Wapbaze_Copyright)

Ogiehor was said to have been found dead in his house located at 13, Egbor Anenne Street, off Benoni, by the Government Reservation Area in Benin City.(Wapbaze_Copyright)

A family member, who does not want his name mentioned, explained that the octogenarian was lying in a pool of blood inside his bedroom in the early hours of Thursday.(Wapbaze_Copyright)

“He was found inside his bedroom dead with a broken head and his hands tied behind him, an indication that he may have been hit on his head and probably strangled.(Wapbaze_Copyright)


“Men from the Forensic Department of the Nigeria Police were in the house this morning to commence an investigation. We cannot ascertain where the killing is coming from,” the family source stated.(Wapbaze_Copyright)

The command’s Police Public Relations Officer, Chidi Nwabuzor, confirmed the incident and said officials of the Criminal Investigation Department in charge of Homicide had been dispatched to the deceased’s residence.(Wapbaze_Copyright)