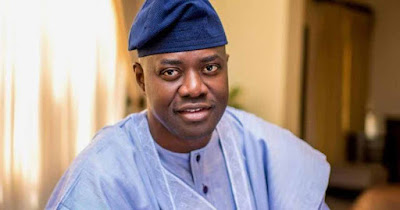 As part of efforts to ensure improvement in the security and safety of lives and property of residents, Oyo State Governor Seyi Makinde yesterday inaugurated an expanded coverage of its Closed Circuit Television (CCTV) surveillance coverage.(Wapbaze_Copyright)

The new coverage area, which now stretches to the two toll-gate areas, including the Lagos-Ibadan Expressway and the Asejiri end of the Ibadan-Ife Expressway, is to help in security as well as traffic management.(Wapbaze_Copyright)

The CCTV project, which was started by the last administration, only covered major red hot zones of the state. The areas include Beere, Molete, Oke-Ado, Challenge, Iwo Road, Agodi Gate, Ojoo, Mokola, Mapo and Sango.(Wapbaze_Copyright)

A telecommunications mast to enhance signal and flow of communication from the cameras and control room was also installed to replace the dependence on the use of Internet, which has been costing the government N3.5million monthly.(Wapbaze_Copyright)

The governor spoke at the inauguration of the expanded and refurbished Oyo State Security Control Room, City Watch and unveiling of the state’s Crime Alert Platform at the Oyo State Security Trust Fund headquarters, Onireke, Ibadan.(Wapbaze_Copyright)

He said plans are on to extend the coverage of the CCTV to other border points and far flung parts of the state,  Makinde said he is committed to improving the welfare of security operatives, urging them to use the expanded facility to curb rape, armed robbery and other crimes.(Wapbaze_Copyright)

The Special Adviser to Governor Makinde on Security, Mr. Fatai Owoseni, said that the CCTVs across the locations had been upgraded and enhanced to enable security agencies pick number plate of vehicles, should the need arise, while also aiding traffic management.(Wapbaze_Copyright)