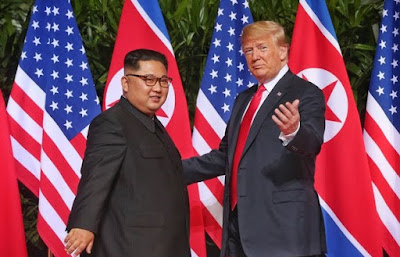 The leaders met in Singapore in June 2018 after Trump mocked Kim over his height and missile launches, and the North dictator called the US president a "mentally deranged dotard" and "gangster".(Wapbaze_Copyright)

But Trump wanted to persuade Kim that it was really a compliment, claims then-White House national security adviser John Bolton.(Wapbaze_Copyright)

In his new book, called The Room Where It Happened, Bolton claims the president signed a copy of Elton John's 'Rocket Man' CD and made it a "high priority" to get it in Kim's hands.(Wapbaze_Copyright)


The president had asked his right-hand man, Secretary of State Mike Pompeo, to deliver the gift at the leaders' first summit, but Pompeo did not, Bolton claims.(Wapbaze_Copyright)

"Getting this CD to Kim remained a high priority for several months."

The former adviser claims Pompeo, considered one of Trump's closest allies, gave him a note during the summit that said of the president: "He is so full of s***."

Bolton also wrote that Trump was very complimentary of Kim at the summit and described the North Korean leader, who has overseen serious human rights abuses, as "quite secretive" but "a very good person".