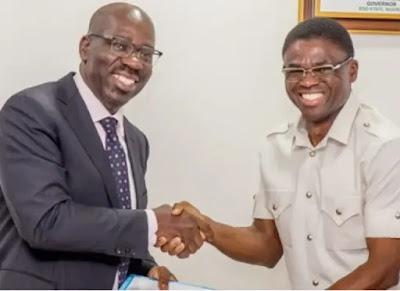 Amid the fanfare that greeted Governor Godwin Obaseki’s pitching tent with the Peoples Democratic Party (PDP) to contest for re-election in Edo State, his Deputy, Rt. Hon.(Wapbaze_Copyright)

Comrade Philip Shaibu has also led his supporters in defecting to the PDP. Comrade Shaibu, who spoke to journalists after obtaining his PDP membership card at the party secretariat in Benin City, expressed disappointment over the undemocratic actions and tendencies of Comrade Adams Oshiomole in his management of the APC at the national level.(Wapbaze_Copyright)

He stated: “I have a mixed feeling with this action. First, one struggled to form a party and after forming that party, those that benefitted from the party took over the party and became tyrants.(Wapbaze_Copyright)


It is not always easy that after one helped to form and nurture a party, one individual would say he is an Adolf Hitler in the system and becomes undemocratic. That was what happened in the APC.”

Comrade Shaibu, however, expressed his unalloyed loyalty to Edo people, noting that their calls for the governor and his team to join the PDP has been heard. He assured that Governor Obaseki remains steadfast with his vision and mission to actualise the aspirations of Edo people and that the strides made in social, economic and human capital development of the state must not be compromised.(Wapbaze_Copyright)