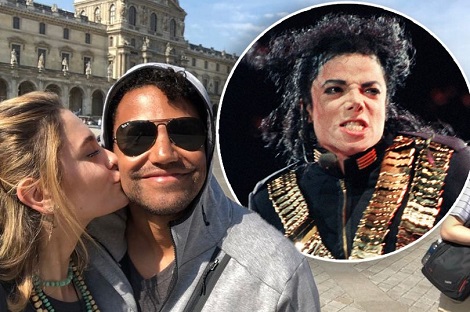 Michael Jackson's daughter Paris opted not to wish him a happy Father's Day yesterday - but did so for her cousin.(Wapbaze_Copyright)

The 22-year-old took to her Instagram account on Sunday night to pay tribute to TJ Jackson, whose father is Tito Jackson, but made no mention of her own dad in the post.(Wapbaze_Copyright)

She shared a sweet picture of the two of them together outside The Louvre in Paris in which Paris kissed TJ on the cheek while he smiled for the camera.(Wapbaze_Copyright)


The next snap showed them walking down the street arm in arm as Paris stuck out her tongue.(Wapbaze_Copyright)

"I love you with all of my heart and I can't even begin to express my gratitude for all you've done.
"I owe you my life."

TJ responded to her sweet tribute in the picture comments.(Wapbaze_Copyright)

He wrote: "I love you Paris. Your message means a lot to me. Thank you."

When Jackson died his mother Katherine was granted custody of all three of his children.(Wapbaze_Copyright)

In 2012 TJ was named co-guardian of the three siblings.(Wapbaze_Copyright)

He stepped in to help when Katherine reached her late eighties.